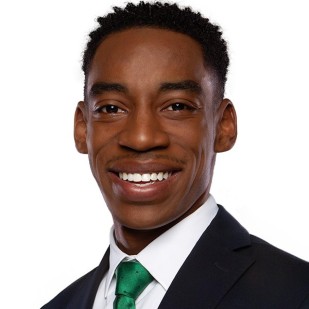 Born and raised in Chicago, Darius is thrilled to return to the Midwest after seven years of moving up and down the east coast.

Darius joins FOX59 and CBS4 after nearly two years at WSAV in Savannah, Ga. During his time he covered a deadly C-130 Plane Crash, Hurricanes Michael and Irma, and in-depth investigations of a Glynn County Police Lieutenant involved in a double murder-suicide and the deaths of two Effingham County teens found buried behind their home.

Darius earned his master’s degree from Columbia Journalism School in New York and graduated with honors from Morehouse College in Atlanta.
While in Atlanta, Darius worked as a freelance news assistant for the national content center at CNN.

At CNN, Darius contributed to breaking news coverage on the Flint water crisis, Pulse Nightclub attack in Orlando and the death of Muhammad Ali and was assigned to work on national issues like gun violence.

In August 2016, Darius was asked to write an op-ed piece about his experience growing up in Chicago where his mother was a victim of gun violence when he was only six weeks old.

By training and temperament, Darius is a firm believer in getting it right the first time, telling stories that impact people, providing a voice for the voiceless and holding the powerful accountable.

When Darius is not chasing his next lead, you can find him looking for a new restaurant or coffee shop, enjoying all Indy has to offer, traveling, mentoring young men and women and spending time with family and friends.

Darius is a proud and active member of Alpha Phi Alpha Fraternity Inc., and the National Association of Black Journalists.

If you see him around say, “Hi!” He’s bound to hold a conversation with you. You reach him via email: dajohnson@fox59.com, Twitter: @DariusJohnsonTV, or Facebook: Darius Johnson TV.