How far would one man go to find the love of his life? Find out in Bad Romance 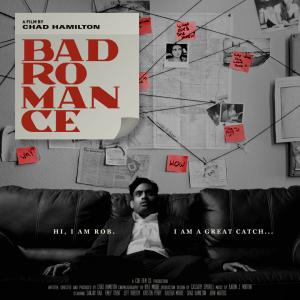 CDH Film Co. is proud to present the neo-noir romantic comedy about a loner desperate to make a connection, Bad Romance.

CDH Film Co. is proud to present the neo-noir romantic comedy about a loner desperate to make a connection, Bad Romance. Chad Hamilton’s charming and intriguing debut feature film starring Sanjay Rao (The Flight Attendant, Mo), Jeff Riberdy (Finders Keepers, Rock Paper Scissors), Kristen Marie Perry (Facing The Black, Girl Next), and introducing Emily Trent and Raleigh Moore, will pull at heart-strings but will also have audiences laughing out loud at the absurdity of anti-hero, Rob’s situation. Beautifully shot in back and white, Bad Romance is a breath of fresh air this Valentine’s Day on Amazon Prime, Vudu, and Tubi.

Written and directed by Hamilton, Bad Romance reminds everyone that nobody can truly find love until they find love for themselves, flaws and all. This original story of Rob and his journey of love and self-discovery is made even more entertaining by the comedy timing of Sanjay Rao, which was partly improvised.

“I chose to make Bad Romance as my first feature film because the ideas expressed in the film are very personal to me, “ says Chad Hamilton. “Rob – the main character – realizes that he can’t find true love without loving himself first. He learns you can’t pretend to be something that you’re not, you have to embrace who you really are – your uniqueness, flaws, and all – in order to find true love. I guess it’s actually more of an anti-romantic noir with a lot of heart, and hopefully, enough heart that the people who watch it can feel a little bit less lonely.”

Synopsis:
Rob is the loneliest of loners. He is so desperate to find love that he constructs an absurd (and quite cinematic) plot to meet and impress women: he is tracking a man by the name of Jack S. who killed his wife to seek revenge, which – to him – is obviously an insanely loyal and courageous thing to do. Hannah, a seductive bartender who used to be married to a man named Jack S., agrees to help Rob track him down – a perfect excuse to get closer to (the now single) Hannah and to do everything he can to become exactly who she wants in her ideal guy. But little does Rob know that some of the people he meets along the way have intentions that turn Rob’s reality upside down – or is it right-side up?