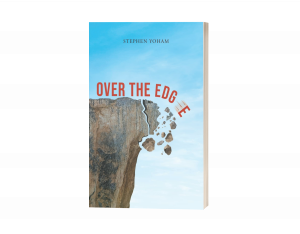 TORONTO, ONTARIO, CANADA, January 26, 2023 /EINPresswire.com/ -- When a national conspiracy begins to unravel and you hold the key to the answers that will expose evil and save lives, what will you do?

This is exactly what off-duty United States Secret Service agent H. Hunter Mahoy is dealt with in the new adventure-filled conspiracy novel, "Over the Edge." The novel is now taking its readers by storm with its thrilling twists and exciting plots that will surely make you hold your breath, written by prolific author Stephen Yoham.

The story starts when Hunter gets wounded while landing a gunfire-stricken jumbo jetliner at Miami International Airport. Hunter had to be operated on. But during the operation, the surgeon finds a suspicious fragment in his left shoulder and queries him as to its origin. Hunter is clueless.

His coworker, Agent Charles Minsk, takes the fragment to a private lab in Washington, DC, where he soon learns that it's a highly miniaturized tracking device—or was, before it was struck by a bullet. The lab owner called it an implant and stated that because of its incredible sophistication and size, it had to have been manufactured by the government, possibly the CIA.

Charles, Hunter, and his fiancee, Morgan Lindsey, a reporter for the Washington Herald, determine that Hunter's implant is at least twenty years old. And he is not the only recipient of the nearly microscopic anomaly. Every person in the United States and many around the world have received one.

The public had been fed the lie that the implants were an immunization against deadly diseases and pandemics. As a result, the masses eagerly complied with receiving the inoculation. But now, some of the devices are beginning to fail, causing their hosts to do crazy, even deadly, things.

The CIA will stop at nothing to keep the truth about their tracking program and its problems a secret. Hunter, Charles, and Morgan need to warn those in immediate danger, including the president, before the CIA can stop them.

With the secrets coming into the light, and the forces trying to stop him, what will Hunter do?

Yoham’s masterpiece will keep you on the edge of your seat, and keep you wanting more, too!

“Over The Edge” is now available on Amazon and other leading digital platforms worldwide!

Yoham’s other books include Operation Ghost Flight, Project Firefly, Timeslot, and Coming Soon: Nineteen Down. A five-book series for all to enjoy.

Bringing stories and ideas to life, one tap at a time.

Bookside Press is all about creating buzz in the digital world. Buzz that'll have each vital message be heard loud and clear. Headquartered in Canada, this hybrid publishing and advertising company aims to share the magic of its authors' books with the world. With a dedicated team of creatives and marketing professionals, Bookside Press collaborates with clients in building better brands that stand out and reach greater heights.