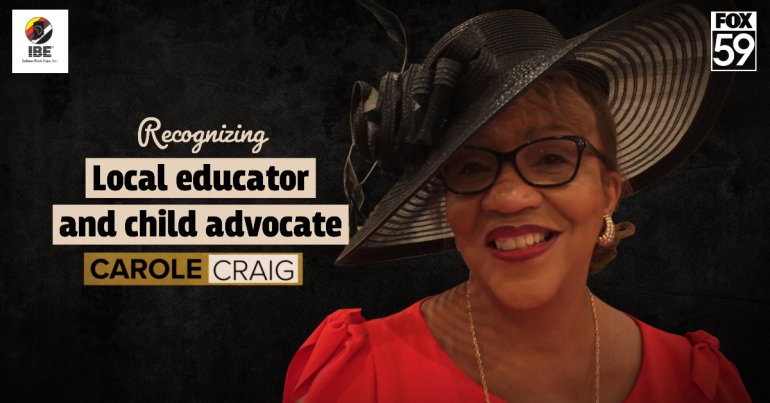 This is the second in a series of stories celebrating Black History Month. In partnership with Indiana Black Expo, we’re highlighting local African Americans who have made an impact in Indy through their professional work, community involvement, volunteerism and more.

INDIANAPOLIS, Ind. – Carole Craig credits a long line of teachers, colleagues and mentors with contributing to her success as a lifelong educator.

Her family story has also been a source of inspiration.

In 1930 at age 11, her mother traveled alone on a train from Statesville, North Carolina to Indianapolis to live with a family who could provide her with a better life and strong education. Craig’s grandmother wanted at least one child to experience a life without hardship.

“It’s just beautiful inspiration, and it stays with my soul,” said Craig, also well-known in Indianapolis for her advocacy and volunteer work with the NAACP.

Craig was salutatorian of her high school, Crispus Attucks, where she says a strong group of African-American teachers encouraged her and served as role models. She went on to earn a bachelor’s degree from Ball State University and a master’s degree from Butler University.

She spent 37 years as an educator for Indianapolis Public Schools, working as a science teacher, guidance counselor, dean of students, principal and education director. She retired in 2005 after nine years as the district’s human resources supervisor and director.

As principal of two different middle schools, Craig was able to greatly improve academic performance – moving both schools from the bottom tier to the top tier.

Craig’s awards and achievements are numerous, including the Center for Leadership Development Excellence in Leadership Award, the Stacey Toran Foundation Outstanding Educator of the Year, and the National Council of Negro Women Leadership Award.

Her work for the NAACP involves advocating for urban schools, as well as helping legislators and the community understand what underserved children need to be successful. She’s committed to spreading awareness about ways teachers can help keep students in school and out of the prison system.

“I’ve always wanted to advocate for those groups in our society marginalized by laws, classism and racism,” she said. “Some people don’t believe that marginalized children can be successful, but yes, they can. I’ve watched it.”

More than any award or accolade, Craig said watching children she has worked with grow up to be successful has been her greatest reward.

“That is so impactful,” she said. “That is much more touching than any physical award you could receive.”

Be aware of BMV holiday closures

Holiday events to warm your spirit this weekend

Male killed in shooting in Brownsburg

Everything you need to host New Year’s Eve