John Andretti was a member of one of the most famous families in racing.

He was the son of racer Aldo Andretti, who is the twin brother of Indianapolis 500 winner Mario Andretti.

John Andretti was the older brother of Adam Andretti, and first cousin to Michael and Jeff Andretti.

Andretti was an active member of the community, being part of Race For Riley during the weeks of the Brickyard 400.

He disclosed in 2017 that he was battling stage four colon cancer, which was believed to be gone, but relapsed in 2018 and again in 2019 after another round of treatment.

His battle with cancer spared his awareness campaign, which started the hashtag #CheckItForAndretti.

“The thing that was great about John is he never forgot where he was from. He never forgot what his name allowed him to do, what his talent allowed him to do. And he used that platform to give back,” said Indianapolis Motor Speedway President Doug Boles.  “The Riley Children’s Hospital here in Indianapolis benefited every year from what John gave back. Even in his battle here with cancer, John used that to say #CheckItForAndretti. Colonoscopies were important. In fact, I just had mine and did it because of John.”

John Andretti’s skills behind the wheel of any kind of race car were admired by his millions of fans around the world, and he always returned that loyalty and kindness to become one of the most popular drivers of his generation. But John’s true mission was helping others, whether through his countless hours of charity work, especially with Riley Children’s Hospital here in Indianapolis, or by the colon screening campaign he started in April 2017 after he was diagnosed with cancer. John’s positive attitude and selflessness throughout his brave fight inspired all of us and will be a legacy that will continue forever. We extend our deepest condolences to his wife, Nancy, their three children and the entire Andretti family.

The Indianapolis Motor Speedway payed tribute to Andretti with their pylon. 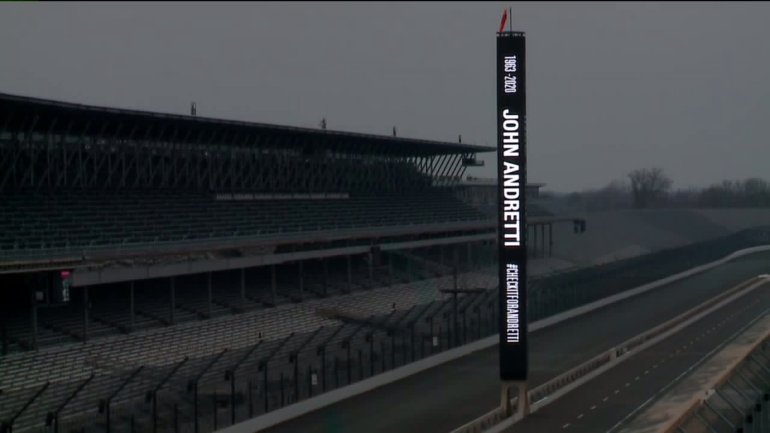 Family and fans are sharing the hashtag on social media in his memory.

Rest In Peace #JohnAndretti. The best godfather. Your passion for Motorsport was admirable. Always the good ones we lose too soon. 🙏🏽 #checkit4andretti pic.twitter.com/WtpSPDzdsV

Sad news today, we lost another great soul to cancer. Rest In Peace John Andretti. Always brought a smile to my face anytime I was around him. What a great driver, competitor, mentor, dad, husband & friend. #checkit4andtetti

Godspeed John Andretti. My first IndyCar teammate. A true racer and great human. I am heartbroken for Nancy, Jarett, Olivia, Amelia, and the entire Andretti family. I will miss your sense of humor the most. Please #checkitforAndretti https://t.co/t7mXYnbaqk

There wasn’t a better soul in racing than John Andretti. A man who won in everything he drove, ever category that he competed in. I spent my #Indy500 rookie year media day with John, and the impression he made on me on that day will last a lifetime. RIP John, you’ll be missed. 🙏🏼

FISHERS, Ind. – Bimbo the deer was becoming something of a celebrity in this city after he was spotted palling around with two husky dogs.

A family in Fishers started caring for the fawn last summer after finding him along the side of the road, away from his mother and close to traffic.

TIPTON, Ind. -- Chances are if you have ordered delivery from Pizza Hut in Tipton, you’ve met Robert Peters. He’s worked there the past 31 years. But you might know him better as "Mr. Smiles." "Every time you see him, he has a smile on his face. He has never not been joyful," explained longtime customer Tanner Langley.  About six months ago, Peters started having trouble with his 28-year-old Oldsmobile.…

What will it take for the Colts to beat Buffalo?

INDIANAPOLIS – What will it take for the Colts to top the Bills this weekend?

FOX59's Chris Hagan and CBS4's Chris Widlic talk what Indy needs to bring to the table to beat the red-hot Buffalo Bills in the Wild Card matchup.

US Treasury again working to put Harriet Tubman on $20 bill

Kerry: US will make up for 4 years of lost action on climate

Photos: The first dogs are home! Champ and Major arrive at the White House

Study: Cancer drug may aid in treatment of COVID-19

First US case of Brazilian COVID-19 variant found in Minnesota

The worst — and best — states for driving