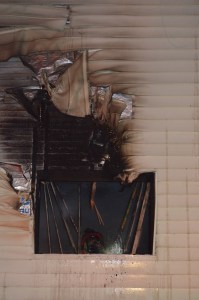 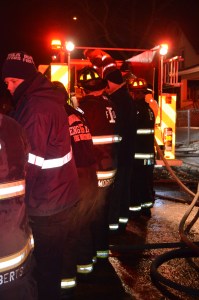 INDIANAPOLIS, Ind. (Jan. 11, 2015) — Indianapolis firefighters battled two suspicious house fires in the same location on the southeast side in as many days. On Saturday night, they asked neighbors for help.

Firefighters came out to a vacant home in the 1700 block of Cottage Avenue at Asbury Street., just before 9:30 p.m. Saturday. It’s the same corner where another home burned just the night  before. One firefighter was injured in that first fire, their efforts hampered by dangerous weather conditions. And Saturday night, efforts were complicated again — this time not just by weather conditions, but also a motorist.

Firefighters told an oncoming driver to turn around and go a different way, the the motorist refused, and drove over a supply line, breaking it. That left attack crews inside the home without water.  The second supply line, standard on all IFD working fires, was in process of being hooked up and had not yet been charged.  Firefighters inside were told to hold off their advance until the second supply line was charged. Within minutes water was re-established, but heavy fire continued to threaten their position and their hose line.

Thankfully, no one was injured.

The Indianapolis Fire Department would like to remind drivers that driving over a fire hose a life-threatening safety issue for firefighters. Please be considerate and re-route your travel pattern.

IFD is also asking anyone who may have seen unusual activity in or near the area to call 1-800-262-TIPS (8477) or Text Info to INDYCS at 274627.  Information may be given anonymously.  They also add that area residents should be vigilant about the activity in their area and be watchful for squatters that may be entering the boarded up vacant structures unlawfully.

Man killed in shooting on east side

Several houses hit in random drive-by on Indy’s near …

1 dead in shooting on Indy’s northwest side

Looking at the Delphi evidence

1 dead in shooting on Indy’s northwest side

Coroner to use DNA to ID Indiana serial killer victims

Even though Black Friday and Cyber Monday are over, …

These 25 deals were the most shopped among BestReviews …

The best gifts for 5-year-olds

The best gifts for 10 year olds