FRANKLIN, Ind – The Franklin Police Department is saying thank you to a 10-year-old boy who raised enough money to outfit the department’s three K9 officers with protective tactical vests.

Richie Scott, a 4th-grader at Creekside Elementary School, started raising the money back in December as part of a community service project. The project was part of Richie’s testing to earn his black belt in Taekwondo.

“I wanted to protect those who protect me, and the whole community,” Richie said. 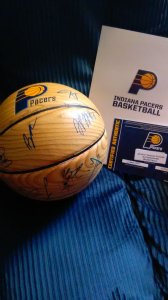 Richie and his family started a GoFundMe page, held a bake sale and placed donations jars in different places around the community. They also got the idea to hold an online silent auction. The effort gained enough community support to include a contribution from the Indiana Pacers. Richie was able to auction off a basketball signed by the team.

Richie’s original goal was to raise enough money to purchase one K9 tactical vest, which his family thought would cost around $800. But several months later, the Scott’s fundraising efforts had surpassed $2,000.

“My goal was to get one vest,” Richie said. “Then since all of it was a huge success, I got three.”

The three vests were enough to outfit each of the Franklin Police Department’s three K9 officers. Richie was able to present the vests to the department during a Franklin City Council meeting last Monday.

“I felt really happy for myself because I didn’t think I was actually going to raise enough of that money,” Richie said. 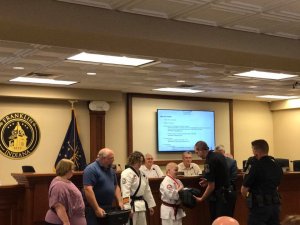 “It’s almost hard to express the words,” said Franklin Police Officer Jeffery Dawe. “To find that in such a young person that wants to help support a public safety agency.”

Officer Dawe says the vests will greatly benefit his K9 partner, Pepper, as well as the department’s other dogs, Thor and Stinger.

“The dogs are often the first one to encounter a suspect who’s being tracked,” Dawe said. “So they can be in the most danger depending on the situation.”

The vests were accepted as official equipment for the Franklin Police Department.

“They told me thank you, and that they’re really glad I did this,” Richie said.

“I want to thank Richie again,” Dawe said. “I also want his family to know how appreciative we are here at the Franklin Police Department.” 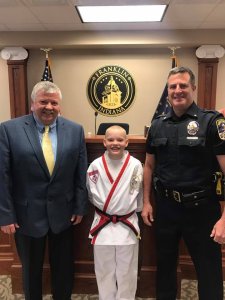 Richie did earn his black belt, and his fundraising efforts are continuing. The Franklin Police Department is planning to add a fourth K9 to their ranks next month. Richie is already raising money to purchase a fourth tactical vest.

“Richie’s going to go far in life, you can tell just by talking to him,” Dawe said. “He’s a smart kid and I just hope the best for him and continue that leadership role he’s taken.”

If you want to help Richie in his fundraising effort, you can check out his GoFundMe page.

Woman shot during carjacking at a southwest side …

East side barber shop gives back to community days …

Barber shop gives back to community after shooting