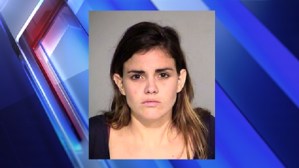 UPDATE (Sept. 15, 2015)-- Police have identified the woman, whose behavior caused a flight to be diverted to Indianapolis.  The woman was identified as 25-year-old Daniela Valez-Reyes. She was held in the Marion County Sheriff's Department overnight on charges of disrupting the operation of an aircraft, resisting law enforcement, disorderly conduct, criminal recklessness, battery with moderate bodily injury, battery and battery against a public safety officer.  She has not been officially charged at this time.

Officials say a woman became unruly and belligerent near the Indiana/Kentucky border. The flight crew tried to calm her down, but said she continued to be aggressive and reportedly struck a passenger and flight crew member.

No injuries have been reported. The FBI was called to the American Airlines gate and the passenger was removed from the plane. While exiting the plane, she allegedly struck airport authorities.

The flight, delayed for about an hour and a half, resumed after the passenger was removed. It is unclear what provoked the suspect's actions.

ATLANTA (AP) — Speakers at the annual Martin Luther King Jr. holiday celebration in Atlanta called Monday for a renewed dedication to nonviolence following a turbulent year in which a deadly pandemic, protests over systemic racism and a divisive election capped by an attack on the U.S. Capitol strained Americans' capacity for civility.

“This King holiday has not only come at a time of great peril and physical violence, it has also come during a time of violence in our speech — what we say and how we say it,” said the Rev. Bernice King, the slain civil rights leader's daughter. "It is frankly out of control and we are causing too much harm to one another.”

(NEXSTAR) - In a new interview, Harvard physicist Avi Loeb says there's a "serious possibility" that an interstellar object that passed through Earth' solar system could be an alien spacecraft.

Scientists, who discovered the object in 2017, call the mysterious entity 'Oumuamua. The scientific consensus determined 'Oumuamua to be of natural origin, but Loeb disagrees. In his new book "Extraterrestrial: The First Sign of Intelligent Life Beyond Earth," he argues that the interstellar mystery object was likely similar to a light sail — a method of spacecraft propulsion — created by extraterrestrials.

When can grandparents safely visit their grandkids after receiving the COVID-19 vaccine?

After allergic reactions at 1 clinic, California pauses use of large batch of Moderna COVID-19 vaccine