ANDERSON, Ind. – An Anderson mother claims a local pet store didn’t allow her 3-year-old daughter with autism to bring her service dog inside.

Nicole Wisler says it happened at Night Stalkers Pet Emporium about a month ago, but the pet store claims the situation never happened.

Wisler says her daughter Lele needs their golden doodle Scooby as a service animal because she has autism.

“In a meltdown, I’ll say go get Lele. He’ll lick her face and that will calm her down,” said Wisler.

Wisley said they take Scooby everywhere they can, but said that became a problem when they stopped by the pet store. She said they opened the door and an employee told them the service dog could not come inside.

“I was mad because the dog is there to help my daughter so that she can be more independent,” she said.

Stacie Miller is a sales clerk at Night Stalkers Pet Emporium. She said she works every day from open to close and this incident didn’t happen.

“I feel bad if that would have happened but it didn’t happen here. We did not do that,” said Miller. 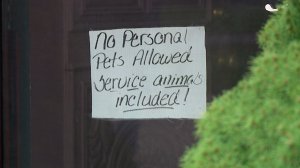 But, Miller says they put up a sign saying “No personal pets allowed, service animals included” a few weeks ago and that the policy is there to protect their animals in the store. They feel some customers are bringing in pets and pretending they are service animals.

“We have had a couple people come in just bringing personal dogs with their vests on them that terrorized our animals and ran around,” said Miller.

Sean Diamond, Director of Training for Indiana Canine Assistance Network, said the store is allowed to ask the dog to leave if the pet is not acting appropriately. Night Stalkers Pet Emporium said it wants owners to provide documentation for their service animals. However, according to the Americans with Disabilities Act, the store can’t do that.

The ADA says staff may ask two questions: (1) is the dog a service animal required because of a disability? And (2) what work or task has the dog been trained to perform? Staff cannot ask about the person’s disability, require medical documentation, require a special identification card or training documentation for the dog, or ask that the dog demonstrate its ability to perform the work or task.

Miller said Scooby would have been allowed inside. Wisler is still calling for change. She said she has filed a complaint.

According to state law, a person who knowingly or intentionally interferes with the actions of a service animal commits a class A misdemeanor.

AUSTIN, Texas (AP) — Texas' ban on most abortions is likely to stay in effect for the foreseeable future, opponents fighting the law said Monday night, after a federal appeals court ruled against sending the case back to only judge who has ever blocked the restrictions.

The decision by the 5th U.S. Circuit Court of Appeals in New Orleans means that legal challenges to stop the nation's most restrictive abortion law next move to the Texas Supreme Court, which is entirely controlled by Republican justices and does not have to act immediately.

Another temperature drop on the way, single-digit lows too

INDIANAPOLIS - If you can believe it, today will be the WARMEST day of the week with highs in the lower 40s under a mix of sun and clouds. If you were hoping for snow, well, I don't have any for you right now. Overnight lows will drop into the 30s and 40s with clouds around.

We start off our day on Wednesday with temperatures in the 30s and 40s but cold air will move in during the day, dropping into the 20s and eventually the teens overnight. Wind chills will drop into the single digits.

INDIANAPOLIS — Some changes are in store for the state health department’s COVID-19 clinic at the Indianapolis Motor Speedway.

The Indiana Department of Health said the vaccination and testing site will remain open through Feb. 26. The site, located in the IndyCar parking lot at 4551 W. 16th St., offers the Pfizer pediatric and adult vaccines, as well as the Moderna vaccine. People can also get their booster shots at the location.

Does omicron cause smell or taste loss?

Temperatures fell to 20 below zero just 28 years ago

Hong Kong will cull 2,000 animals after hamsters in pet store get COVID

Vacant house flattened in near south side house fire

You can order free COVID-19 tests starting this Wednesday, here’s what you need to know

Another temperature drop on the way, single-digit lows too