DELPHI, Ind. – It’s been two years since Abby Williams and Libby German went missing, and still, the person who killed them has not been found.

“Somebody asked me, where do you see yourself in five years?” Abby’s mother, Anna Williams, said. “I’m like, ‘Well, five years ago, I certainly wouldn’t have [seen] myself here.’”

Anna says she never imagined this would happen to her daughter.

“There are things that you just don’t have to worry about anymore, getting up for school buses and school closed and school delays,” Anna said. “It’s just different, and we don’t know how to do it, but we figure it out every day.”

Anna says she no longer holds her breath every time the phone rings. She says she’s confident police will contact her as the investigation warrants. Instead, Anna remembers those precious moments with her daughter, like the picture of Abby in polka dots that has captured the hearts of so many.

“That was actually at my cousin’s bridal shower and their theme was the Kentucky Derby,” Anna remembers. “We actually made those hats. She helped me make that hat, we picked it out.”

Anna keeps herself busy with Abby’s Angels, giving to the less fortunate, and work on a ball field in Delphi in Abby and Libby’s names, a positive for other kids from this tragedy.

And she knows that Abby is always with her.

Anna knows that someone knows who’s responsible, and that call would change her life.

“Finding out who took our girls will close a chapter,” Anna said. “I don’t know what that’s going to take. I don’t know how much pleading, begging we can do because we’ve done it. I’ll do it as long as I have to.”

Anyone with tips can submit those via the following:

On Wednesday, a food drive will be held by the families of Abby and Libby. 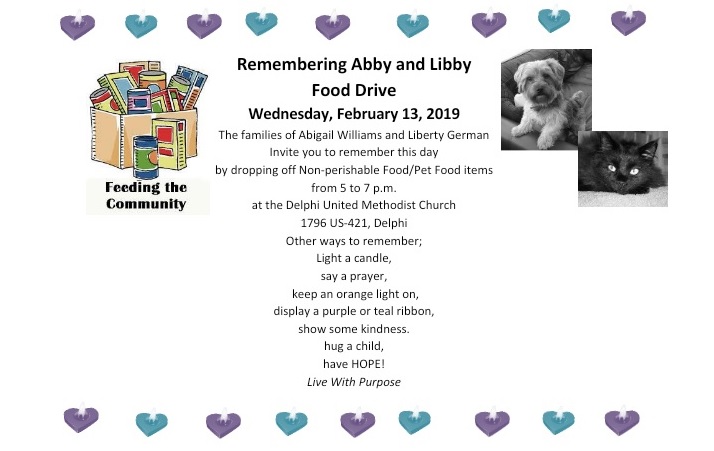 Family says motorcyclist has died after crash with …