Update (4/19) - Three of the victims that were rushed to the hospital following the crash have been identified.

Michael Blackmore, 19, and Olivia Evans, 18, both of Indianapolis, are in serious but stable condition at Methodist Hospital.

Anyone with information about the crash or the possible incident at Rhodious Park is asked to call Crime Stoppers at 317-262-8477.

Police say five people were ejected from the vehicle near Harding Street on the near west side. Emergency crews were dispatched to the scene around 9:15 p.m.

The driver of the vehicle, 17-year-old Taylor Parsons, later died from injuries suffered in the crash.

Both Gross and Parsons attended Ben Davis High School, officials from Wayne Township Schools confirmed. The district released a statement about their deaths:

The MSD of Wayne Township is heartbroken over the loss of two Ben Davis High School students in a fatal accident Tuesday night. This loss will be felt by our entire community. Grief counseling will be available for students and staff at Ben Davis.

Police say the vehicle was traveling at a high rate of speed in the far left lane of I-70. The vehicle made a last-second maneuver across all three lanes, in what police believe was an attempt to exit on Harding Street. 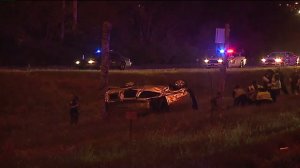 Sgt. John Perrine with Indiana State Police said the Nissan Pathfinder slid into the grass and rolled four or five times before coming to a rest on its side. The officer says the occupants were not wearing seat belts.

"This is a horrific crash that is going to impact a lot of lives," said Perrine. "Seat belts would've saved some lives tonight."

Police are looking into the possibility of another vehicle being involved. They say a vehicle may have been chasing the Pathfinder after an incident at an area park.

Police are asking for anyone with information about the crash to call State Police at 317-899-8577.