UPDATE: Boeing 747 expected to fly at low altitude over downtown Indy CANCELED due to weather conditions

We want to thank everyone in our Indianapolis community for their understanding about the postponement and eventual cancellation of today’s scheduled Rolls-Royce Test Bed fly over Indianapolis.

As many of us know in the aviation industry, all the best planning relies on the weather cooperating.   Unfortunately, that was the case today.  We received word as the Rolls-Royce Flying Test Bed was entering Indianapolis airspace, that the cloud ceiling was simply too low.  After receiving communications from the FAA, the aircraft’s flight crews waived off the approach and continued on to its destination in Tucson, Arizona.

There is at least one shining light in today’s planned event; most of the community has a better understanding of the type of work that we do here in Indianapolis.

For those of you who wanted to see what the aircraft looked like – this was a photograph that was taken last night from Michigan, where it was recently repainted. 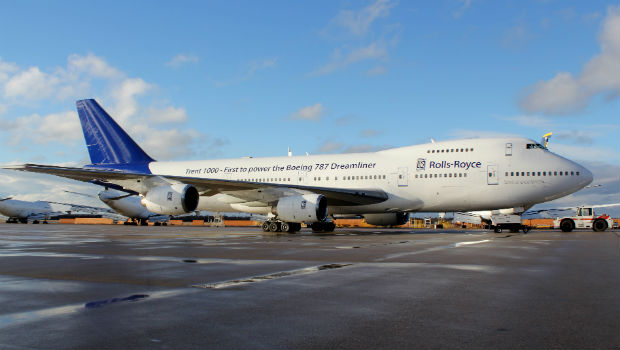 The jumbo jet will fly over Indianapolis on its way back from Oscoda, Michigan to the Rolls-Royce Flight Test Operations base in Tucson, Arizona. It was originally scheduled for noon, but due to weather conditions, the jet was delayed an hour.

While it flies over Indy, it will undergo low flight levels for photography opportunities over facilities for Rolls-Royce, who owns the jet, and Raytheon Company. According to Rolls-Royce, the flight plan has been approved by the Federal Aviation Administration (FAA). It will fly in from the east side and go over the south side of downtown before exiting on the southwest side.

As a precautionary measure, local government, airport officials and first responders have been notified.

“Rolls-Royce flying test bed programs are critical in the certification process to bring new jet engines to market.  Our 747 is returning from a maintenance center where we began preparing it for upcoming tests on our new Trent 1000 TEN engine.  During the return flight to Tucson, we thought it would be great to say thank you to our Indianapolis engineering and manufacturing teams that contribute to the engine program’s success,” said Clive Barton, Rolls-Royce Flying Test Bed Program Manager.

What we know about the multi-state Listeria outbreak

Joe Rogan passed on having Trump on podcast

Talking to Your Kids About Money

Where Is Sherman? Little Bit of Everything