INDIANAPOLIS, Ind. – A new painting on the outside of a restaurant has gotten mixed responses from neighbors. The mural of two rabbits suggesting they’re having sex and smoking was finished this week on the side of Beholder, located on East 10th Street.

According to the owner of Beholder, Jonathan Brooks, the mural raising concerns was done by a graffiti artist from Los Angeles. Brooks said the artist was in town and was looking for places to leave her work and asked him if she could use the wall. Brooks said he didn’t even know what the artist was going to do.

The artist goes by Jules Muck, and has put a little text bubble next to the rabbits that reads, “MUCK ROCK.” The artist uses the handle @muckrock on Instagram. 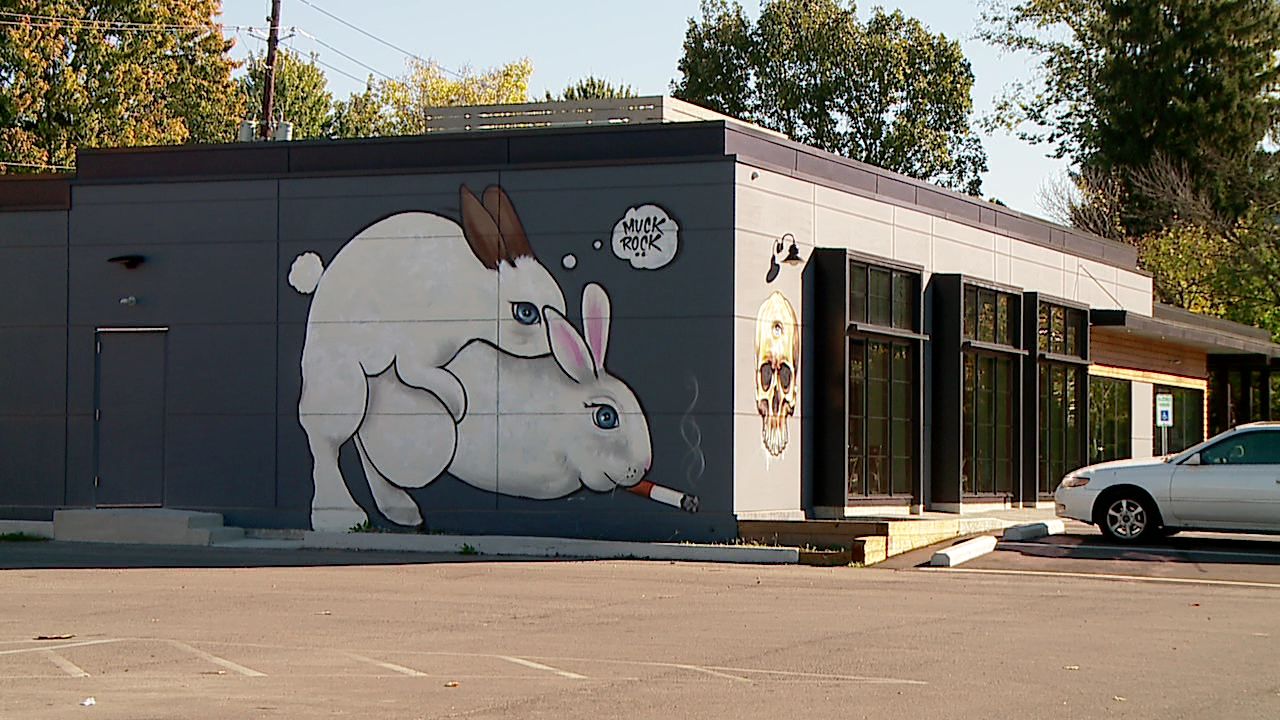 Neighbors who live in and near Woodruff Place, which borders the restaurant to the south, have mixed feelings about the new display in the area.

“I got a great sense of humor and I got an act for art,” said Johnnye Davis, who added the mural is more suitable for adults. “I see it from an artistic view.”

However, Valerie Davis said she wants the rabbits painted over, adding she plans to talk to the owner of the building.

Brooks said the restaurant rents the space to run his recently-opened business.

“My issue with is its bunnies humping and it’s promoting cigarettes in the inner-city where people don’t need to be promoting unhealthy habits like that,” Valerie Davis said. “That’s unacceptable and kids are walking. You’re right next to two schools. Elementary school and middle school kids are walking. Why do we have to explain to our kids?”

Matt Belsaas said the restaurant used to be an auto shop and that he and several neighbors used to get their oil changes there. He found it ironic that the new use is causing uproar.

“There’s nothing outright obscene with it, or nothing profane,” Belsaas said. “I guess everyone is entitled to free speech without those things being there, but as a small business owner, I would pay more attention to making friends of all my neighbors and not trying to intentionally turn anyone against me. It’s his right to do that.”

The owners of Beholder released the following statement Thursday afternoon:

We appreciate the interest and feedback from the community on Beholder’s new mural by Jules Muck, a prominent L.A. graffiti artist that we are honored to have in our great city. As a restaurant that thrives on creative exploration, we are inspired by local food, the surrounding community, and artists both local and national. We have invested in the near Eastside community, local food vendors, and many artists and artisans who contributed to the unique environment that is Beholder. Inside you will find custom tables and a gold plated bar by Herron graduate and local furniture maker Donald Mee, a mural by another Herron grad, Justin Cooper, along with graffiti by other local artists. On our plates, you find pears from Fruit Loop Acres right down the street as well as ingredients sourced from around the world. We have created this space and this food to encourage our community to explore culinary and cultural boundaries. Not everyone is going to get it – the food- the art – we understand that, but we will continue to support and contribute to the creative culture in Indianapolis.

INDIANAPOLIS -- Jamila Spaulding said she was back in her office counting up the night’s receipts and getting ready to pay out her employees early Sunday morning when IMPD officers arrived at Mimi’s Lounge & Events Center in the 1100 block of Arlington Avenue to investigate a report of shots fired.

What they found, said Spaulding, was one of her customers shot to death in the parking lot of a nearby hardware store.

MONROE COUNTY, Ind. -- A Marion man was arrested in Monroe County Saturday for allegedly stealing a vehicle he was test driving from a dealership in Kentucky under a false identity, according to Indiana State Police.

At about noon on Saturday, ISP received a call from police in Henderson, Kentucky regarding a vehicle that was stolen by a man that took it for a test drive from a dealership in their jurisdiction and never returned with the vehicle.

INDIANAPOLIS (AP) — Indiana labor union leaders are calling for improved workplace safety enforcement with the state’s rate of deaths while working about one-third higher than the national average.

Federal data shows Indiana had 146 worker deaths during 2019, the most recent year available. A report from the AFL-CIO says that represents 4.7 deaths per 100,000 workers compared to the national rate of 3.5 deaths per 100,000.

For the first time since the pandemic, Hoosiers will be able to celebrate Mother’s Day at restaurants and long term care facilities

States scale back vaccine orders as interest in shots wanes

EXPLAINER: Did US hiring slow because of a ‘labor shortage’?

Cyberattack on US pipeline is linked to criminal gang

Indiana DNR to spray in 3 counties for invasive gypsy moths