CARMEL, Ind. – Administrators at Carmel High School are facing the threat of a lawsuit after removing a pro-life poster from the building.

Liberty Counsel, a nonprofit organization “dedicated to advancing religious freedom,” says administrators removed the poster display created by Carmel Teens for Life after another student complained that it was “offensive.”

The club reportedly spent over 25 hours painting the display which included 300 hearts, each representing 10 lives, to symbolize the written statement “3,000 Lives Are Ended Each Day.”

“I think the school miserably failed the students,” said Liberty Counsel Founder and Chairman Mat Staver. “We’ve demanded immediately that they reverse course otherwise we will file a lawsuit against the school.”

Staver said he would give school administrators a “couple of days” to allow the poster to be hung up and issue an apology to the students or else his organization will file a suit against the district.

The posters were approved for display, said Staver, and they complied with club signage guidelines, but school officials took them down because signs are not permitted to “interfere with what folks are thinking or feeling comfortable with.” 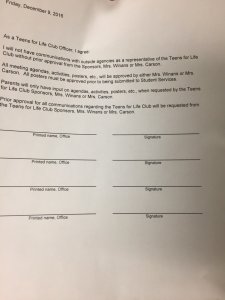 The organization says members were threatened that if they did not sign the agreement immediately, the club sponsors would be forced to resign.

“By allowing other student clubs to post their viewpoints throughout the school while banning a poster from Carmel Teens for Life, the school has engaged in unconstitutional viewpoint discrimination,” said Staver. “Schools also may not censor pro-life viewpoints. The actions of the school officials are outrageous. Not only did they censor protected speech, they threatened students with retaliation if they sought legal counsel. We will hold this school and these officials accountable.”

Late in the afternoon on December 5, 2016, Carmel Clay Schools received a letter from Liberty Counsel claiming that Carmel High School had violated the rights of certain Carmel High School students.  That letter requested a response to its claims by December 12, 2016.

CCS immediately referred this letter to its legal counsel for review and response.  Less than 24 hours after receiving the letter, CCS counsel contacted Liberty Counsel in an effort to amicably resolve the situation and offered to provide a preliminary response by December 16, 2016. Liberty Counsel thanked CCS for its candor and willingness to investigate. Today, contrary to its conversations with CCS, Liberty Counsel chose to air its side of the situation publicly.

Carmel Clay Schools’ staff and administration are treating the claims made in this letter very seriously. We are reviewing the matter to determine what happened and to respond to our students and community in an appropriate and respectful manner.

Carmel Clay Schools supports the rights of its students to express their opinions and our school clubs are one opportunity for students to do so, as long as they operate within reasonable guidelines.   We give serious consideration to any claim that a student’s rights have been violated.  We are in the process of thoroughly reviewing the claims to determine what happened and respond accordingly.

MUNCIE, Ind. – Muncie police arrested two people in connection with the deadly shooting of a man over the weekend.

Morgan Bell, 26, and Brandon Hodge, 28, face charges of murder and conspiracy to commit murder in the death of 33-year-old Robert Eugene Scott III.

The Bentonville-based retailer currently offers Express delivery — which allows orders to be delivered to customers within two hours — in nearly 3,000 stores.

WASHINGTON (NEXSTAR) -- Over the weekend, the country moved a step closer to $1,400 stimulus checks hitting bank accounts as the House approved a $1.9 trillion pandemic relief bill that was championed by President Joe Biden.

The big question now: How quickly will the measure move through the Senate and could we see those direct payments this month?

Send us your questions for Indiana’s congressional delegation for our special town hall: ‘IN Focus: Path out of the Pandemic’