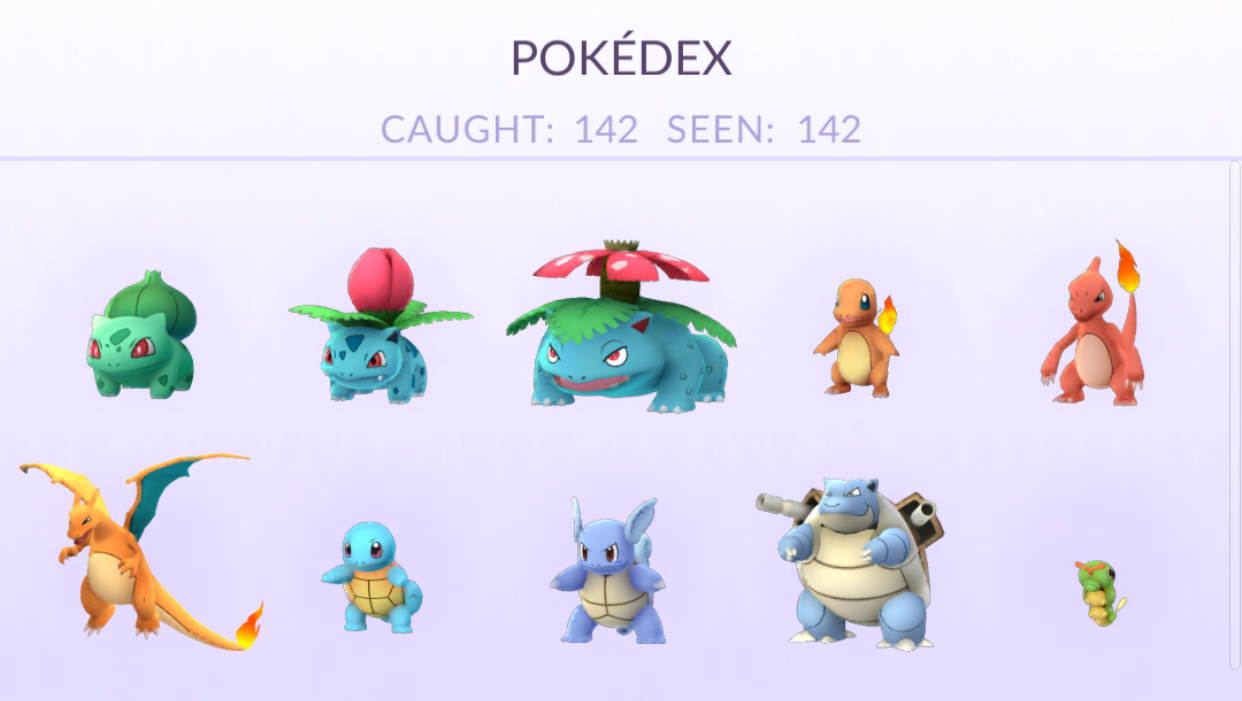 BROOKLYN, N.Y.–Gotta catch ’em all? That was one New Yorkers motto, and he actually fulfilled his goal!

On Thursday, Nick Johnson announced to the world that he had caught all 142 Pokemon currently available in the United States on the Pokemon Go game, and it appears he’s the first to do it. He posted images of his captured Pokemon, showing he’s caught a total of 4,629!

The other stats he released included that he’s hatched 303 eggs, and is on level 31.

And you may be shocked to learn he didn’t go very far to catch ’em all.

“I went to Jersey for some Dratini hunting. Also caught a Porygon there. Rest were Manhattan and Brooklyn,” Johnson said in response to a question on his Reddit page.

He also caught a few in rural upstate New York, but it doesn’t seem that moved him closer to finding them all.

“When I went to a rural area for weekend Pokemon were incredibly hard to find until I got to a hotspot in one town. It’s a shame the game doesn’t work there as it would be so much fun to actually be able to explore outside the city with this game,” he said.

So what was his last catch?

“Last thing I found was the Omanyte I needed to evolve to Omastar.”

Not only did he accomplish this goal, but he’s apparently improved his health in the meantime!

He said he’s lost “about 8 pounds, but I was doing 8 miles a day. My endurance walking/jogging has definitely improved. Either gym or poke walk probably will do the trick, just do whatever gets you motivated to exercise! For me Pokemon go made it fun to exercise in a way the gym does not.”

And he apparently did this all while working 50 plus-hour weeks! So how’d he do it? “I also haven’t slept as much as a normal human should this last week.”

You can find more tips from Johnson here, and learn more about his adventures here.

Here are some pictures showing his accomplishment:

WASHINGTON (Reuters) — President Donald Trump on Monday rescinded entry bans imposed because of the coronavirus on most non-U.S. citizens arriving from Brazil and much of Europe effective Jan. 26, two officials briefed on the matter told Reuters.

Reuters first reported in November that the administration had been considering lifting the restrictions, imposed early last year in response to the pandemic, after winning support from coronavirus task force members and public health officials.

BERLIN (AP) — The International Energy Agency says oil and gas companies aren't doing enough to reduce the release of methane, a potent source of planet-heating emissions, that is seeping out of pipelines and production plants.

A report published Monday by the Paris-based organization found the estimated 10% drop in methane emissions from oil and gas companies last year was largely due to lower production amid a global decline in demand due to the coronavirus pandemic.

ATLANTA (AP) — Speakers at the annual Martin Luther King Jr. holiday celebration in Atlanta called Monday for a renewed dedication to nonviolence following a turbulent year in which a deadly pandemic, protests over systemic racism and a divisive election capped by an attack on the U.S. Capitol strained Americans' capacity for civility.

“This King holiday has not only come at a time of great peril and physical violence, it has also come during a time of violence in our speech — what we say and how we say it,” said the Rev. Bernice King, the slain civil rights leader's daughter. "It is frankly out of control and we are causing too much harm to one another.”

When can grandparents safely visit their grandkids after receiving the COVID-19 vaccine?

After allergic reactions at 1 clinic, California pauses use of large batch of Moderna COVID-19 vaccine