JOHNSON COUNTY, Ind. — When voters in Johnson County’s Center Grove Community Schools district head to the polls between now and November 5, they’ll decide whether to approve a property tax increase to pay for additional safety and security measures throughout the school district.

Center Grove administrators are asking voters to pass a tax referendum that would generate about $24.8 million over 8 years.

“With all of the taxes across White River Township, the increase would generate about 3.1 million dollars for the school corporation per year,” said Superintendent Rich Arkanoff.

For individual property owners, the increase would be 11.5 cents for every $100 of a home’s assessed value. According to an online tax calculator on the district’s website, the owner of a $200,000 home with the Homestead Tax Credit would pay an additional $112.41 in property taxes per year. Without the Homestead Credit, the amount would be $230.00 per year. 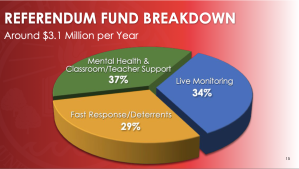 Each year, just under two thirds of the money would be spent on various security improvements around the district. Those include a new live video monitoring system that will involve analytical cameras that can spot unusual activity in a certain area, based on the time and location.

“If for some reason, the behavior in the room is unusual, that camera will focus on the behavior and then will notify the live monitoring person that something’s happening unusual in that room,” Arkanoff said. “And then they can determine whether or not it’s a threat.”

The live monitoring system would be housed in a new emergency operations center that will include members of surrounding police and fire departments, in addition to Center Grove officers.

The money would also be used to hire several new officers for the district’s police department.

“We currently have five police officers, we have nine buildings in the district,” Arkanoff said.  “And we would like to have at least one per building.”

About $1.5 million of the annual $3.1 million would go toward augmenting mental health services throughout the district. The money would be used to hire more mental health counselors and support personnel to help students deal with the daily issues and stresses of modern life.

Student Services Coordinator Daniel Weems said he frequently meets with students who are struggling with depression and thoughts of suicide. Many of those underlying problems are the result of situations at home, or stemming from social media.

“When I was growing up, if you were being bullied, you could be bullied by one student in your area,” Weems said. “Now you can be bullied by a whole community.”

“We do have the ability at a young age to change that trajectory if we really pour into those kids when they’re young,” Hyde said.

Since the Noblesville West Middle School shooting in May 2018, multiple central Indiana school districts have been meeting and sharing ideas about how to make students and staff safer. Mental health has been a growing topic of concern and has been the focus of referendums in several area districts.

Arkanoff said Center Grove and other central Indiana school corporations have benefited by visiting other districts in different parts of the country. In recent months, Arkanoff has met with school officials in Littleton (Colorado), Detroit, Nashville and Washington D.C.

“We’re looking at what we can do, not just in the sense of safety and security, but mostly in the sense of mental health, social and emotional learning,” Arkanoff said. “Just observing what’s going on in those school corporations, what they’re implementing and what’s working.” 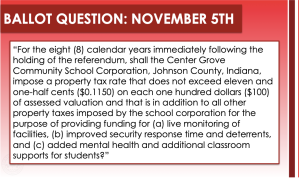 Center Grove resident, Ann Reaume said she planned to vote “no” on November 5 because she didn’t feel the tax increase was necessary.

“The school’s practically locked down now,” Reaume said. “You can go in one door, and that’s it. They have at least five policemen that are there every day.”

Reaume’s neighbor, Joe Petro said he planned to vote “yes” to the referendum because the extra money was worth it.

“I don’t mind a tax increase for the additional security for the kids and for the whole area really,” Petro said.

For some White River Township voters, because of uncontested races, the referendum will be the only issue they will decide on November 5.

INDIANAPOLIS - The Indianapolis Colts annual 5K normally kicks off the season. For 2020, the 5K is Saturday, September 26, ahead of the third game of the season. Not only is the season already underway, but the 5K in 2020 is virtual.

Normally about 5,500 Colts fans start the event outside Lucas Oil Stadium and finish the 5K inside the stadium right on the 50-yard line.

INDIANAPOLIS — Beginning Saturday, Indiana officially moves into Stage 5 of the state’s Back on Track plan. While bars and restaurants can lift restrictions on their establishments, Shandy Death believes not all of them will.

“Just because the governor is allowing the state bars to open throughout Indiana at 100% capacity does not mean that the bars in Marion County will necessarily open at 100% capacity,” Dearth said. “As we’ve seen throughout the pandemic, the local health officials can set different regulations that are more strict.”

INDIANAPOLIS- A family is still searching to answers after their daughter was shot and killed after attending a house party.

Valentina “Tina” Delva was the victim of a shooting reported around 2 a.m. on Friday September 18 near 6th and Ohio Street.