As you may remember, Davis is the 13-year-old standout pitcher who received national attention last year in the Little League World Series for her 71-mph fastball.

Bloomsburg University student Joey Casselberry sent a nasty tweet about Davis when news broke that Disney was making a movie about her life. 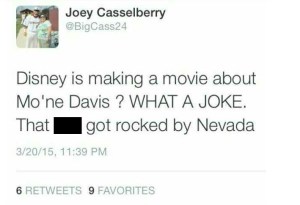 Despite Casselberry’s Tweet, Davis reached out to Bloomsburg University officials Monday, and she asked them to reinstate Casselberry. But according to WNEP, the University will not budge on that issue.

“Everybody makes mistakes and everyone deserves a second chance and I know he didn’t mean it in that type of way and I know a lot of people get tired of seeing me on TV, but sometimes you just have to think about what you’re doing before you actually do it,” Davis said on ESPN’s SportsCenter. “I know right now, he’s really hurt and how hard he worked just to get to where he is right now and I mean, I’m pretty hurt on my part, but I know he’s hurt even more.”

Bloomsburg University officials hope that this Tweeting fiasco can be a lesson for all who use social media.

“It’s very big of her to want to do something like that and make that statement. It takes a lot because of what was said about her. Once you hit send, it’s out there. You may try to delete it. Screen captures make something live forever in the social media world,” said Bloomsburg University Sports Information Director Tom McGuire to WNEP.

Casselberry is still a student at Bloomsburg University and may be allowed to play next season, but that has yet to be determined.

INDIANAPOLIS-- A $50,000 reward was announced Tuesday for information in the murder case of Wilma Hochstetler.

Hochstetler and her husband, Jonathan Hochstetler, were shot on Sept. 17 in the 3700 block of North High School Road on the city’s west side. Wilma died as police responded to the scene around 1:30 a.m.

LONDON (AP) — WikiLeaks founder Julian Assange would have to be “almost dying” to get out of arguably the most notorious prison in the United States if convicted of espionage charges and sent there, a court at London's Old Bailey heard Tuesday.

Assange, who is fighting an extradition request from the U.S., would likely be sent to the federal Supermax prison in Florence, Colorado, if convicted, according to Maureen Baird, a former warden at the Metropolitan Correctional Center in New York.

Those new cases were reported to ISDH in the last 24 hours.

Justice the dog ‘loving life,’ finishing up training nearly 2 years after being found with severe burns