INDIANAPOLIS — At the end of a year when Indianapolis’ homicide total should tragically clear 230 lost lives, the City has committed another $2.2 million in community crime prevention grants to fight violence.

The Central Indiana Community Foundation announced the awards, funded by the County Option Income Tax and allocated by the City County Council, to 26 groups. 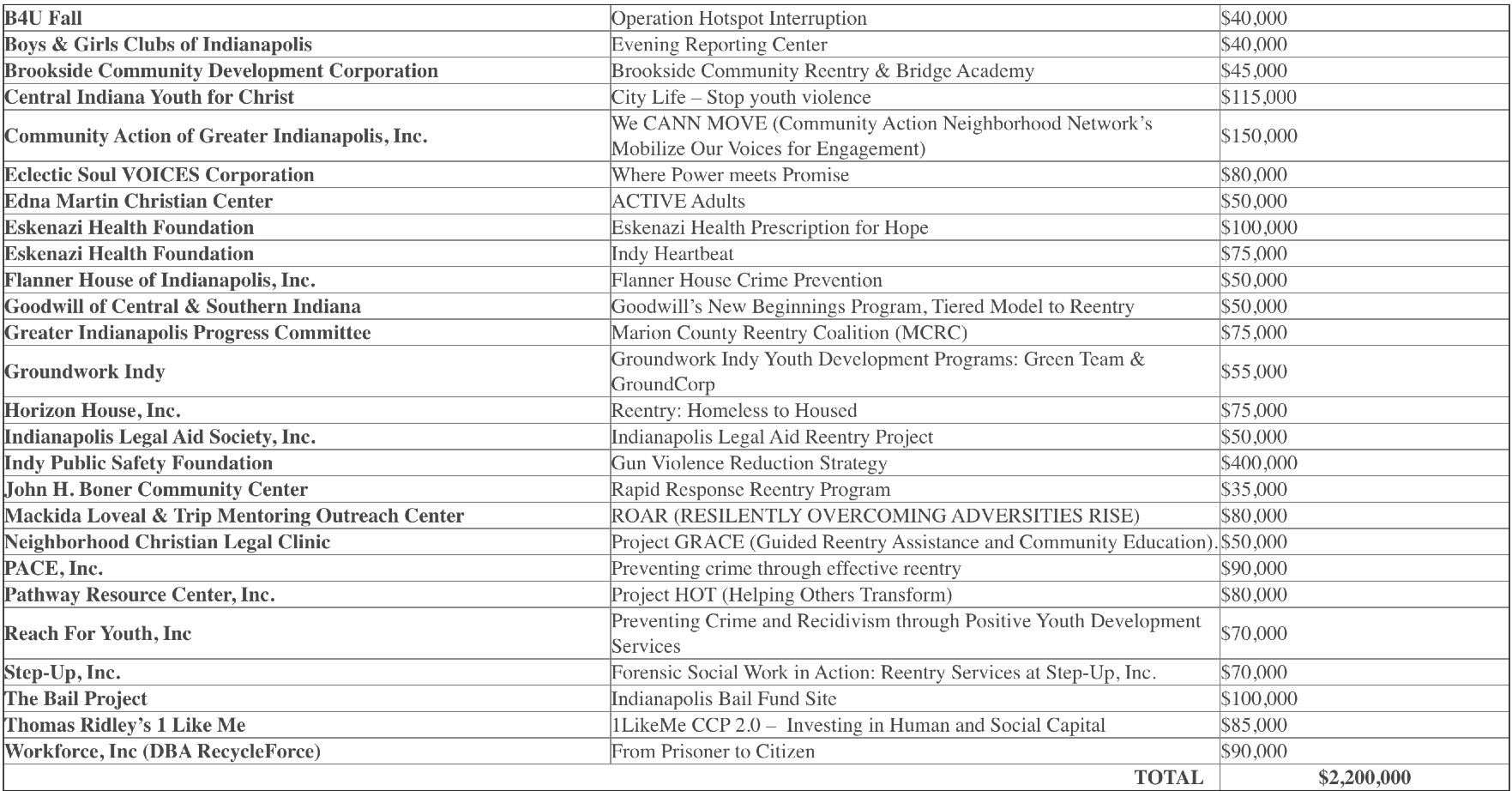 The Indy Public Safety Foundation will receive the largest award of $400,000 to develop and implement a gun violence reduction strategy based on a program that reduced gun violence deaths by 35-40% in cities like Oakland, California.

“We’ll be hiring six new violence interrupters,” said IPSF Executive Director Dane Nutty. “When violence does occur, the interrupters are based in the neighborhood, they know who to go to, who to talk to, they assure that there won’t be retaliatory violence, that there’s not additional violence that occurs when there is as incident in the community.”

Nutty said the Foundation will work hand-in-hand with Shonna Majors, director of community violence reduction for the Hogsett Administration, and also provide cash payments to those at risk of involvement in violence.

Recycleforce, which provides jobs to 300 ex-offenders every year, will receive $90,000 for its programs.

“This grant is to serve people within days and certainly less than three months out of prison who are sent to us because the oversight officer does not know where he’s going to send them to work often because of the crime they committed,” said Recycleforce Executive Director Gregg Keesling. “We know that the return to prison rate is 54%. We know we’re at 17, and I want to point out we’re only serving medium to high risk individuals.”

Keesling estimated that 80% of his employees said they voted in the most recent election.

Additionally, the mayor’s office controls approximately a quarter million dollars in direct crime reduction grants, and new this coming year is a program directly under the City-County Council in which councilors will divide approximately $1.3 million in funding to fight crime in their individual districts.

In late September, IMPD reported that while homicide was up 31% over the year before, rape, robbery, aggravated assault and burglary reports were down 22-39%.

FISHERS, Ind. -- Formal strangulation and domestic battery charges have been filed against a Madison County public defender for an incident in Fishers.

The Union County Sheriff's Department said they got a 911 call just before 1 a.m. reporting a woman walking in the middle of US 27 South.

PORTLAND, Ore. (KOIN) -- Two men who were seen on surveillance cameras crawling into a Portland, Oregon business through a drywall tunnel spent as long as 12 hours inside, eventually stealing valuable equipment and personal information.

Jesse Richardson, the co-owner of The Brother's Apothecary, said the thieves broke into the local CBD tea shop on Sunday.

Johnson & Johnson vaccine under review Friday for emergency use authorization

While You Were Sleeping: Coronavirus updates for February 26