ESPN reported the NFL found 11 out of 12 game balls on New England’s side were significantly deflated; a move that could’ve made the ball easier to handle in the cold and rain during Sunday’s game against the Colts.

Many are saying, either way, it wouldn’t have changed the fact that the Patriots won the game, including Colts tight end Dwyane Allen who said this on Twitter: 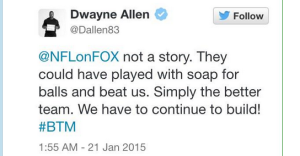 But there is a story… and it’s not about whether the Colts would’ve won Sunday’s game. The story, some say, is about ethics.

“We have a huge movement within the IHSAA to make sure sportsmanship is at the forefront of what we do,” said Robert Faulkens, Assistant Commissioner at IHSSA.

Fulkens says at the High School level, Indiana has never dealt with a deflated football scandal.

“I’ve been in Indiana 20 plus years and I’ve never heard of someone under-inflating balls for an advantage,” he said. “We’re more about teaching kids to be responsible and do the right thing.”

If it’s proven that someone on the NFL level didn’t do the right thing though — Faulkens says it could become an even bigger issue.

“The officials are responsible for the balls,” he said. “Beyond the Patriots, there are some other people who have responsibility in this, and they may have to answer some questions.”

FOX59 News contacted the NFL again today about the latest information. Their spokesperson Brian McCarthy would only say this:

“Our review is continuing and we will provide an update as soon as possible.”

Meanwhile, Colts fans have been upset, pointing an incident in 2007, when the NFL found the Patriots illegally taped their opponents hand signals.

“That’s not coincidence, I don’t think so, something happened,” said Colts fan Michelle Collins about the scandal. “Somebody knows something… and it’s just not right.”

The Patriot’s spokesperson says the team is cooperating with the investigation.

INDIANAPOLIS -- A shooting left one person dead on Indy's south side early Saturday.

According to the Indianapolis Metropolitan Police Department, police responded to a call near the intersection of Weber Drive and Orinoco Avenue, near Southport, at around 2:20 a.m. for what originally was reported as a crash.

The new president’s vision for flushing cash to individuals, businesses, states and cities battered by COVID-19 passed on a near party-line 219-212 vote. That ships the massive measure to the Senate, where Democrats seem bent on resuscitating their minimum wage push and fights could erupt over state aid and other issues.

"To reach those members of our community that truly have chronic health conditions or disabilities that really prevent them from being mobile or from leaving their home," Dr. Michael Kaufmann, State EMS Medical Director, said. "It's to get them vaccine."

Some local GOP leaders fire up base with conspiracies, lies

Twitter announces ‘Super Follows,’ and not everyone is happy about it

Stanford professor answers a modern quandary: Why is Zoom so exhausting?