DELPHI, Ind.—It has been six months since the murders of two young teens rocked the small community of Delphi, Indiana.

Liberty German, 14, and Abigail Williams, 13, were dropped off near the Monon High Bridge on February 13th. But when the teens didn’t make it to the designated pick-up location, a widespread search effort launched to search the woods where the girls were last seen.

The following day, the girls’ bodies were found.

Investigators released a grainy photograph of the man they believed was responsible for Libby and Abby’s deaths. The image was captured on Libby’s cell phone along with a voice recording of a man saying “down the hill.” 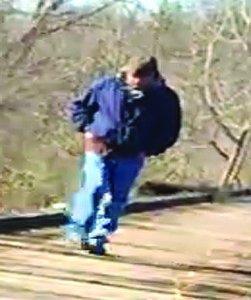 For five months, the blurry photo and the audio were the only pieces of evidence released publicly. Then on July 17th, investigators released a composite sketch of the suspect.

Authorities say witnesses who claimed to have seen the suspect near the Delphi Historic Trails came forward during the course of the investigation.

Police say the man is between 5’6” and 5’10” and weighs between 180 and 220 pounds. The suspect is described has having reddish brown hair and eyes that are darker than blue.

“We feel this is very important because it gives us a better look at the person in the picture,” said Sgt. Kim Riley with the Indiana State Police, “it shows a little more facial features, it gives you a little more information on what we are looking at, who the suspect might be, and that is why we feel it is important that the picture is out there”

The sketch is sparking hope that the case will be solved. Becky Patty, Libby German’s grandmother spoke to FOX59 the day the image was released in July, she said the sketch makes it feel that the resolution to the case is near.

“Before it was so vague, like we said it could be anybody around here, well now it cannot just be anybody,” Patty added, “you asked me how I felt when I saw that picture and it was almost relief because we could look at him and say ‘we gotcha, we are going to get you now, we have a face to go with you.’”

Investigators say 6,000 additional tips poured in after the release of the composite sketch. The image has reinvigorated many people and businesses in Delphi who say the sketch gives them hope.

“It’s on everyone’s mind. Everyone is talking about it still and still wondering who it is,” said Maddy Sutton, manager of a restaurant in Delphi, “I’m hopeful. I know he’ll be caught, whether it’s now or later, but I know he will be. I have faith.”
Meanwhile, nearly $100,000 has been raised to improve security around the Delphi Historic Trails.

Julia Leahy, the executive director of the Carroll County Chamber of Commerce says there’s been a drop in visitors since the murders, adding that people still avoid the trails due to safety concerns.

“It’s going to be a struggle to get people to know that they can come back and feel safe and enjoy all the things we have to offer,” Leahy said in an interview with FOX59 in July.

Delphi needed to raise $50,000 so the Indiana Housing and Community Development Authority could contribute a matching grant.

Anyone with information about the killings or the person in the sketch should call the Delphi homicide tip line at 844-459-5786. Tips also may be emailed to abbyandlibbytip@cacoshrf.com.

NEW YORK (AP) — Walmart has reversed course, announcing it is returning ammunition and firearms to their displays in its U.S. stores.

On Thursday the nation’s largest retailer said it had removed the items from displays due to “civil unrest” in some areas of the country. Guns and ammunition, however, had remained for sale at the stores, just not visible to shoppers.

The department said the shooting happened around 4:45 near the intersection of Smith Valley Road and Berry Road. One person was pronounced dead on the scene. Another was transported to an Indianapolis hospital in critical condition.

The Kokomo Police Department said Elmer Byers was last seen around 1:35 p.m. Friday. He is believed to be in extreme danger and may require medical assistance.

Fall streaming season is here and with it, some changes

An Election Day role for National Guard? Maybe, but limited

Study: 1 to 2 million tons of US plastic trash go astray