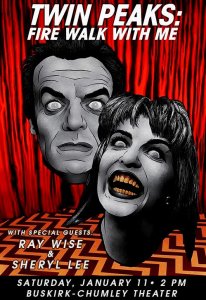 BLOOMINGTON, Ind. — A very large piece in the impossible puzzle of Twin Peaks will materialize in Bloomington in the coming weeks.

The new screening tour of David Lynch’s Twin Peaks: Fire Walk With Me is making a stop at the historic Buskirk-Chumley theater with special guests, actors Sheryl Lee and Ray Wise.

“Getting to watch the movie on the big screen, followed by getting to hear Sheryl and Ray talk about making the film is something every Lynch fan has to experience,” said show promoter Mike McGraner.

“Beyond The Ashes: A Screening of Fire Walk With Me” is set to take place on Saturday, January 11 at 2 p.m., beginning with a screening of the film, followed by an intimate question and answer session with the actors.

“I am looking forward to the fan interaction in Bloomington. It’s always great to see how fans react to meeting the cast. Some cry, some laugh, some share stories. It makes for a pretty amazing time,” McGraner continued.

Released in 1992, Fire Walk With Me is the prequel film to the original television series and is arguably the lynchpin to understanding the events that unfold in Showtime’s 2017 Limited Event Series, known as Twin Peaks: The Return.

The film follows Twin Peaks icon and TV show catalyst Laura Palmer during the harrowing last week of her life, while featuring the crooner Chris Isaak, a cameo by the late David Bowie and a formica table.

Appearing at the Bloomington stop are lead actors Sheryl Lee as central character Laura Palmer, with Ray Wise as her brooding and abusive father, Leland Palmer.

“Seeing Fire Walk With Me is always an event. It is such an emotional undertaking,” said Scott Ryan of Blue Rose Magazine, an indie publication of reflective Twin Peaks writing pieces and insider information.

Ryan believes Wise’s powerhouse presence and Lee’s career-defining performance of an abuse survivor are reasons why the film has lived on for so many years, despite its poor critical reception in 1992.

Fire Walk With Me is now seen as a masterwork in David Lynch‘s catalog, having been re-released in 2014 with long-lost deleted scenes known as The Missing Pieces, and an esteemed Criterion Collection Blu-ray remaster in 2017.

The renewed appreciation and newfound love of the film became even more obvious to McGraner after a successful run of Ohio screenings in July of this year.

“These shows started as a one-off weekend in Columbus at Studio 35,” McGraner said. “635 people showed up from all over the world in a span of three days. After the shows, we were out to dinner and I was asked to head this thing up and do it all over the country.”

McGraner explained the independently produced tour strives off advance ticket sales, and that the film with the question and answer session runs around 180 minutes with Wise and Lee signing autographs and taking pictures afterwards.

The Blue Rose Magazine recently announced their next issue will be out in the spring and focuses on the pilot episode of Twin Peaks that premiered on television 30 years ago.

Ryan attended and tabled at the Columbus screenings and is thrilled to have a presence at the upcoming Bloomington showcase.

“I am lucky enough to set up a table of Blue Rose Magazine merchandise. At the Columbus event, Ray and I sang a show tune beforehand. I am also Sheryl’s bodyguard, so if anyone gives her any trouble, they will have to deal with me!” Ryan said with a laugh.

While preparing for the Bloomington showing, McGraner reflected on Twin Peaks and its incredible staying power.

“It has a great way of sending you through every human emotion, whether it’s fear, sadness, love or otherwise. That’s why it has lasted as long as it has,” he said.

He also thanked all of the Twin Peaks die-hards for their support of this tour.

“Ray and Sheryl are excited to see you, so thank you to those who have purchased their tickets,” McGraner concluded, “For those who have not, now is the time to get them!”

“Beyond The Ashes: A Screening of Fire Walk With Me“

Fans have begged for Warner Bros. to release the infamous "Snyder Cut" of "Justice League" and on Wednesday, those prayers were answered.

The "Snyder Cut" — an extended version of the 2018 superhero film from director Zack Snyder — will debut on HBO Max next year, WarnerMedia said Wednesday.

Songwriters go remote to craft the next hit

NASHVILLE, Tenn (AP) — During a recent songwriting session, singer-songwriters Sarah Loethen and Christoffer Wadensten pieced together the lyrics and melody of a song they were writing about the global pandemic.

Loethen played the first verse and Wadensten, who performs under the artist name Meadows, came up with a melody for the chorus on his acoustic guitar.