Photos from “Beyond The Ashes: A Screening of Fire Walk With Me” (courtesy of TakeTheRing.com):

“It’s been a wacky ride! There’s no other way for me to say it than that. I was originally hired for four days as a corpse and here we are three decades later!”

Sheryl Lee is reflecting on Laura Palmer, the iconic character whose murder launched the pop culture phenomenon Twin Peaks. Perhaps the most crucial installment of the story, the prequel film Twin Peaks: Fire Walk With Me, is preparing to screen in Bloomington, Indiana, while fans around the world continue to dissect its meanings.

“Everybody is going to interpret art in a different way, and possibly even in different ways within our own lifetime. It’s wherever that person is in their own life story, then the film or the book or the painting is going to mirror something back to them, and it’s going to be different for each person.”

It’s almost the 30th anniversary of Laura Palmer’s body washing up on shore – wrapped in plastic – and the celebrations have already begun: a recent release of the comprehensive Blu-ray box set, a new virtual reality game, and the official announcement of the Twin Peaks 30 at Graceland in Memphis, Tennessee this year.

“The thing that I love so much is just these incredible people that are in my life now because of it – from David [Lynch, director] and Sabrina [Sutherland, producer], to all the actors and the crew that we’ve worked with. When we have these events, whether it’s the one at Graceland or whether it’s the screenings, to get to go play with them again is just delightful, that’s a gift.”

As she looks back on the past 30 years, Lee says she is hopefully continuing to grow and evolve as a person and as an artist, while embracing the different perspectives life can bring – not unlike the show itself. 2017’s Twin Peaks: The Return shocked audiences with its different take on their favorite town, including Lee’s resurrection as an arguably living, arguably breathing, Laura Palmer.

“No matter what I watch now, I’m going to have a different perspective than I did ten years ago, or 20 years ago, or 30 years ago. I don’t know which part of that is a personal part, and which part is an artistic part directly related to Twin Peaks. I was in awe of what David did in The Return, just as a fan of his and of his artistic expression. I know enough to never think that I know what David’s going to do.”

While Laura Palmer appears as a memory and a specter in the Twin Peaks TV series, she lives in the flesh as the main character of Twin Peaks: Fire Walk With Me – Lee’s career tour de force. A harrowing journey of Laura Palmer’s last days on Earth, the 1992 film was intensely criticized upon release, but has since been seen by many as one of David Lynch’s masterpieces. Lee says she and co-star Ray Wise love bringing the film experience on the road.

“I’ve really enjoyed them because the Q&As are much more in-depth. Each audience brings something different, which I love – it keeps it alive in that way. There’s an intimacy to it and a live show feeling to it that makes it really fun.”

Fire Walk With Me is a tough and terrifying watch, as the audience witnesses Laura being tormented by Bob, and entity who inhabits her father, Leland, played by Wise. 30 years later, it is Laura’s resistance to the mental and sexual abuse that has made her a hero in the eyes of Twin Peaks fans.

One of Lee’s favorite roles was playing another exceptional woman, German photographer Astrid Kirchherr in 1994’s Back Beat, recently released on Blu-ray. She joined Stephen Dorff in director Iain Softley’s tale of fifth Beatle Stuart Sutcliffe and the love of his life. Lee says meeting Kirchherr was an honor she’ll never forget.

“I wouldn’t accept the role unless I had her blessing to do it – it just kind of felt like sacred ground in someone’s life. She was wonderfully generous with her time. She let me go in and see all of her archives of photographs, some of them had never been published. Creatively, it was an incredible experience.”

Lee says she enjoys the challenge of finding the truth of her characters, however bizarre they may be, and recalls being in awe of an action set for the first time. While working with another master of horror, Lee again walked on the edge of life and death as Katrina, a prostitute that slowly becomes the night in John Carpenter’s Vampires.

“Even though it was a vampire film, I still have to find the truth of my character. John was really great to work with, we had wonderful creative conversations in terms of Katrina’s story line. To be on a set like that with these incredible stunt people, that for me was really new and I had so much fun. I just wish so badly that I would have gotten to fly!”

When asked about other collaborators, Lee explains that her Twin Peaks parents top her list. She says she’s incredibly lucky to count Wise and Grace Zabriskie as friends. Wise is another Twin Peaks fan favorite with extensive film and television credits including Robocop and Fresh Off The Boat, and will appear alongside Lee at the Bloomington, Indiana screening of Fire Walk With Me on January 11.

“Ray is a blast! He’s so funny that sometimes he gets me laughing so hard I can hardly answer a question. He truly can do everything. As an actor, he can go from terrifying to seriously dramatic to hysterically funny in less than thirty seconds. People just love meeting him. I’m a huge fan of his, as a human and as an artist.”

Zabriskie plays Laura Palmer’s mother Sarah in the original TV series, the Fire Walk With Me feature film, and is an unquestionable highlight of 2017’s The Return. Lee says Zabriski is an inspiration and was blessed to play her daughter again in the yet-to-be-released The Makings of You.

“I’m a huge fan of Grace’s. Like Ray, her range is phenomenal. I just think she’s brilliant. I feel incredibly lucky to have her as a friend and as a mentor. Everything she does, I learn from watching.”

With the exception of a bizarre first act centered around Bob’s first victim Teresa Banks, Fire Walk With Me boldly confronts the terrors of the Palmer’s troubled home life head-on, with masterful portrayals by Lee, Wise and Zabriskie. Lee, however, believes the horrible dynamic of the Twin Peaks household is something too common in the real world today, and hopes that we can collectively find a solution.

“How can this be still happening so much? The statistics have not gone down in the thirty years since I’ve done the show – they’ve gone up! What are we missing as a culture, as a society? This is happening right under our noses all the time. What can we do to pay more attention and figure out how to heal this and to prevent it? And I don’t have the answer, you know. I think the answer has to be holistic, in the sense that it comes from many, many, many different pieces.”

In the Twin Peaks universe, Fire Walk With Me is an essential piece of the unsolvable puzzle. It is the prologue and the epilogue to the original television show, and the gateway to piecing together The Return – and in the middle of it all is Sheryl Lee as Laura Palmer. Twin Peaks fans from across the globe seem to inherently understand this as truth, and the love generated at these film screenings is palpable.

“When you’re acting on TV or in films, you don’t get to have the full circle, exchange of energy that you do on stage. Any chance that we get to go and actually meet the viewers, the fans, the humans – the hearts and souls – in all the different parts of the country, that’s what we look forward to the most.” 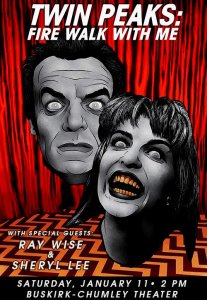 “Beyond The Ashes: A Screening of Fire Walk With Me”

‘Lean On Me,’ ‘Lovely Day’ singer Bill Withers dies at 81

Bill Withers, who wrote and sang a string of soulful songs in the 1970s that have stood the test of time, including “ Lean On Me, ” “Lovely Day” and “Ain’t No Sunshine,” has died from heart complications, his family said in a statement to The Associated Press. He was 81.

The three-time Grammy Award winner, who withdrew from making music in the mid-1980s, died on Monday in Los Angeles, the statement said. His death comes as the public has drawn inspiration from his music during the coronavirus pandemic, with health care workers, choirs, artists and more posting their own renditions on “Lean on Me” to help get through the difficult times.

The founder of The Institute for Greatly Endangered and Rare Species (T.I.G.E.R.) appears in the hit Netflix docuseries and has not been happy about his portrayal.

NEW YORK (AP) — John Prine is in stable condition after being placed on a ventilator while being treated for COVID-19-type symptoms, his wife, Fiona Whelan Prine said Monday.

Coronavirus in the US: Here’s what happened Friday

Coronavirus in the US: Here’s what happened Friday