Skip to content
Live Now
Live Now
White House Coronavirus Task Force provides update on pandemic
This is an archived article and the information in the article may be outdated. Please look at the time stamp on the story to see when it was last updated.

INDIANAPOLIS, Ind. – A picture of a snake wrapped around a dock at a central Indiana park is creating worries among frequent hikers, but experts say the animal does not pose a threat to families.

They are urging the public to know what to look for, in case they do encounter a dangerous snake.

The photo was posted on the Eagle Creek Sailing Club Facebook page. Dozens of comments show concerns over the animal being a copperhead snake, which is venomous. 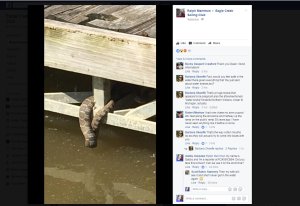 DNR officials say the snake in the picture is actually a water snake.

“You are much more likely to encounter any host of non-venomous snakes,” said Scott McDaniel, DNR Conservation officer. “They will bite but it’s not going to harm you.”

These animals become more visible during this time of the year, according to McDaniel.

“It won’t be uncommon at all to have interactions with snakes out here around the water or your wooded areas, even in suburbia,” McDaniel said.

“You need to look for elliptical pupils, flared nostrils because they use heat to track their prey and you’re also going to look for a triangular head as opposed to an oval head,” McDaniel said. “Just going by coloration or banding is not an accurate way to identify it.”

In Indiana, there are four kinds of venomous snakes – Copperhead, Massasauga Rattlesnake, Timber Rattlesnake and the Water Moccasin. The Copperhead is the most common and is typically found south of Indianapolis.

McDaniel suggests wearing long pants if you got out hiking. He also said you should be careful where you step if a trail includes logs or rocks on the ground, where snakes could be lurking.

Just last year, a man was bitten by a Copperhead snake in Brown County.

KOKOMO, Ind. -- Officials in Howard County are implementing further restrictions to stop the spread of the coronavirus. Some in the community think it goes too far.

On Friday, March 27, the Howard County Board of Commissioners passed a new ordinance ordering any stores that are still open to place signs where non-essential items are stating they can not be purchased.

INDIANAPOLIS, Ind. – A pair of Indianapolis families are mourning after a triple shooting leaves two dead and one in the hospital.

The violence claimed the life of a football player at Cathedral High School.

INDIANAPOLIS, Ind. -- When U.S. Surgeon General Dr. Jerome Adams named Indianapolis alongside some other major American cities as the next COVID-19 virus hotspots, it got a lot of attention in Central Indiana.

“We must now focus on flattening the curve AND raising the bar in emerging hotspots like New Orleans, Chicago, Detroit, LA, Miami, and Indianapolis. We have the playbook, but we must all increasingly run the plays faster and better as #COVID19 spreads the field,” read a tweet from Dr. Adams Sunday.