LAWRENCE TOWNSHIP, Ind. – The brother of principal Susan Jordan said she reacted on instincts. The 22-year principal of Amy Beverland Elementary in Lawrence Township died Tuesday when a bus somehow accelerated and jumped the curb.

Two children were hurt, and Jordan pushed other children out of the way. She’s credited with saving lives.

There’s been an outpouring of support for Jordan locally. National media outlets picked up the story too, including People magazine.

FOX59 was invited inside the school Friday morning to see the growing memorial for the beloved educator. 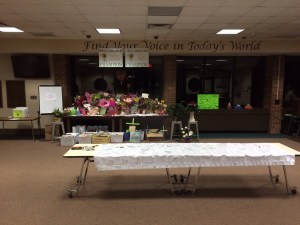 Jordan’s brother Bob talked to FOX59 on Thursday morning before he left Evansville to come to Indianapolis.

“When I hear that she pushed four, five kids out of the way and saved some kids lives, that was Susan,” said Bob Kelley.

Jordan will be remembered as a hero principal. Kelley said it is simply another sign of her dedication to her life’s calling, looking out for children.

“I’m very proud of her,” he said through tears, “We’re going to miss her. But we’re going to be thinking that she saved some people when she was killed.”

Kelley said over the years he encouraged his sister to retire. She was 69 and could have enjoyed the time, he thought, but Susan told him she didn’t want to quit just yet, that she had more left to give.

“She loved it so much, felt like she had a lot of gas left in the tank,” said Kelley.

In her tragic death, Jordan’s family is seeing first-hand how much she was loved. Community members are donating books to the Lawrence Township district in her honor and also leaving memorials at the school.

Classes are dismissed at Amy Beverland Elementary and the Early Learning Center there until February 1.

IMPD is still investigating the circumstances surrounding the crash. Police said it could be a week before that report is complete. Investigators said the bus involved will be released back to the school district in the coming days.

Jordan’s family will say their final goodbyes this weekend, but Kelley said it will take much longer to truly mourn the loss.

“It’s going to be extremely difficult for her daughters and grandkids,” he said, “She’s just going to be terribly missed.”

MONTICELLO, Ind. – An Indiana landmark is closings its doors after nearly 100 years.

Those who live close to Indiana Beach now fear their community will never be the same.

Professor Andre Simpson had a problem. The University of Toronto's Scarborough campus was paying through the nose for a crucial material for its 3D printer. Few would have guessed McDonald's would come to the rescue.

Simpson is director of the school's Environmental NMR Center dedicated to environmental research. Central to this research is an analytical tool called the NMR spectrometer. NMR stands for nuclear magnetic resonance and is technically similar to how an MRI works for medical diagnostics.

That’s the alarming picture painted by some British employers about the impact of new U.K. immigration rules set to be introduced in less than a year.