INDIANAPOLIS, Ind. – The family of a 62-year-old Indianapolis woman killed in a hit-and-run crash over the weekend is asking for help solving the case.

The deadly crash took place Saturday on the city’s east side, near Brookville and Arlington.

Police couldn’t confirm if the woman was walking in the street or trying to cross the street when she was hit, but her family wants the driver who sped away held accountable for the death.

"They have no heart. They don’t care about nothing in the world," said cousin Ralph Franklin.

Ralph says his cousin Pamela Bonilla, who also used the last name Jeffers, lived near the scene of the crash. Her family is still stunned by the sudden loss.

"It’s really hitting home for us and we need answers," said Franklin. 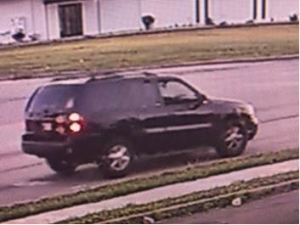 Police did release a surveillance picture of a black GMC Envoy that sped away from the scene following the collision.

Along Brookville Road, there are sidewalks on the south side of the street, but not on the north side. Police said Saturday night the case can serve a larger public safety lesson.

For their part, Pamela’s family feels the streets of Indianapolis will be a little safer if the driver of the SUV is arrested.

"Whoever did it, justice will be done to them because it’s wrong. They knew it was wrong when they ran off. We just need justice for this tragedy going on with our family," said Franklin.

So far no arrests have been made. Anyone with information on the suspect's SUV is asked to contact Crime Stoppers at 317-262-TIPS.

The Mooresville Metropolitan Police Department said an officer patrolling the streets noticed a vehicle with only 1 tail light and a license plate that didn't match the car it was on.

The fire started on I-65 Northbound beginning near the 143 mile marker. Fire crews confirm the blaze stretched for about 6 miles. They believe sparks from the tires of a semi-trailer truck caused the fire.

(CNN) -- When voters in Fulton, Wisconsin, arrived to cast their ballots in a local election Tuesday, the voting process looked a little different.

Rather than the usual paper ballots, voters made their selections on digital tablets, loaded them onto plastic cards outfitted with memory chips, and inserted them into a card reader that saved the votes to a computer and printed a paper copy of each ballot to be placed in a ballot box.