The wheelchair-accessible van stolen from a Greenwood home on New Year's Day has been returned to its owners!

GREENWOOD, Ind. -- The search is on for a family's wheelchair-accessible van, after someone stole it from their driveway just hours into the new year.

It would've been shocking enough for Patrick Parson to discover someone had rifled through his car on New Year's Day, but that was nothing compared to what he discovered seconds later Tuesday morning.

"You can't believe that...what's supposed to be there is not there," Patrick Parson said.

Parson found his family's red 2010 Dodge Caravan missing from the driveway. A neighbor's security camera confirmed that someone stole the van around 5:30 a.m., just minutes before Parson walked outside to leave for his shift an EMT. 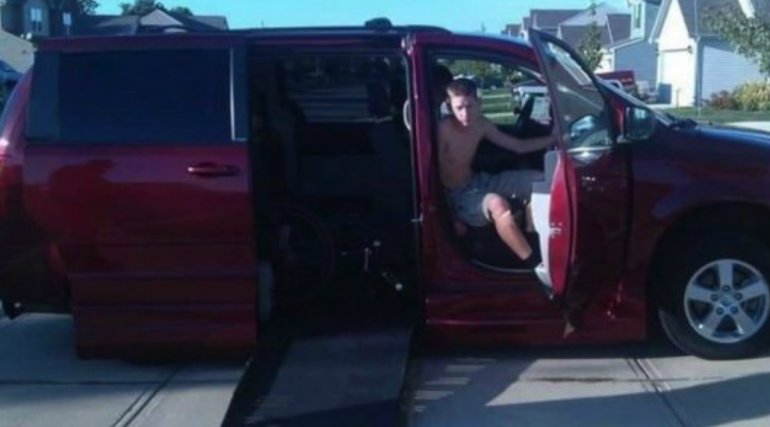 "It's been a surreal day, it really has," Patrick Parson said Tuesday evening.

The van belongs to Parson's son, Tyler, who lives with Friedreich's Ataxia, or FA, a disease similar to ALS but slower to progress. The 25-year-old uses it to get everywhere, including to take care of his great-grandma every day and to attend classes at IUPUI, where he's studying to be a counselor.

"I’m basically confined. It’s like I’m under house arrest, I have no way of getting anywhere," Tyler Parson said.

Tyler's mom posted on Facebook about the missing van and thousands of people shared it, hoping to locate it as soon as possible. The family also reported the theft to Greenwood Police.

Patrick Parson said the van looks like any other Dodge Caravan, but it has a sticker on the back that notes it has a wheelchair ramp inside. He thinks it would'be been hard to miss the fact that the van had been modified for accessibility.

"I hate to believe that somebody’s that cold-hearted, that knows what they took and took it anyways," Patrick Parson said.

The family paid to make the van accessible using grant money, and Patrick Parson said it could cost up to $70,000 to replace. He hoped that someone will either spot it or turn it in by contacting either the family directly or Greenwood Police.

"We just want the van back," Patrick Parson said.

"I don't think people know how much we appreciate their help," Tyler Parson said.