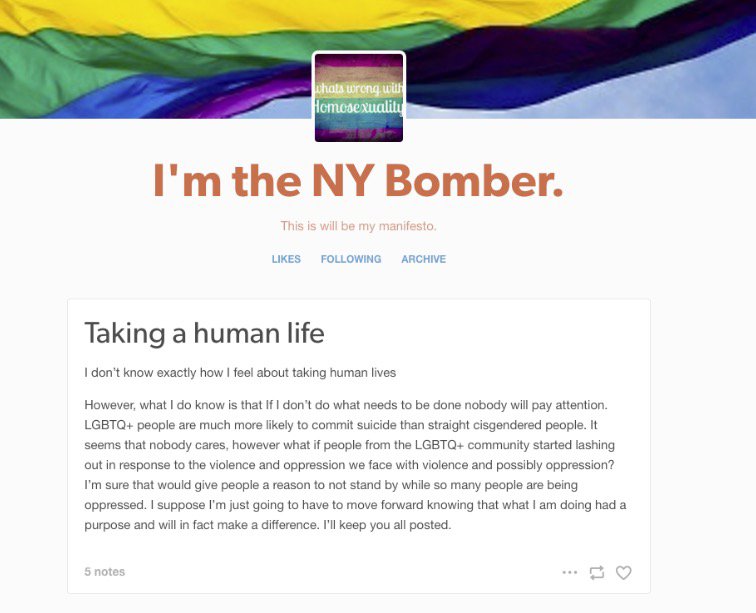 NEW YORK — A federal law enforcement official says the FBI is evaluating a claim of responsibility for the New York City bombing that injured 29 people.

The claim was made on the social blogging service Tumblr. Officials tell The Associated Press that the FBI is working to determine the authenticity of the post.

The post, titled “I’m the NY Bomber: This is will be my manifesto,” was pulled offline within 45 minutes of WGN-TV’s New York sister station WPIX publishing this story.

However, what I do know is that If I don’t do what needs to be done nobody will pay attention. LGBTQ+ people are much more likely to commit suicide than straight cisgendered people. It seems that nobody cares, however what if people from the LGBTQ+ community started lashing out in response to the violence and oppression we face with violence and possibly oppression? I’m sure that would give people a reason to not stand by while so many people are being oppressed. I suppose I’m just going to have to move forward knowing that what I am doing had a purpose and will in fact make a difference. I’ll keep you all posted.

You probably have all seen the news by now,

the explosives detonated in New York City, that was me. Those were just some tests, I know where I have made errors and I will not make the same mistake next time.

I did it because I cannot stand society.

I cannot live in a world where homosexuals like myself as well as the rest of the LGBTQ+ community are looked down upon by society.

It is 2016 and we are still being viewed as mentally ill, sinners, attention seekers, and just plain weirdos in general. I am not going to stand by while under classed and underprivileged people are oppressed. I am not going to stand by while there is inequality in my country such as the racism being seen in white police officers all over the country. I am not going to live in a country where it is OK to have a misogynist, xenophobic, racist Islamophobic, republican candidate running for President of The United States! That’s implying that republicans in general should even be taken seriously as they are all cisgendered privileged white people.

This is not the end, this is just the beginning. I will be remembered. I will make a difference. I will eliminate my targets before it is too late.

(NEXSTAR) – Superman will now fight for “truth, justice and a better tomorrow.”

On Saturday at DC’s FanDome event, DC Comics officially announced that Superman’s longtime motto — “truth, justice and the American way” — was being updated to better reflect his international storylines and appeal.

(WJW) – Mötley Crüe singer Vince Neil accidentally stepped off stage during a concert on Friday and broke his ribs, a guitarist for Neil's band appeared to tell attendees in footage taken during the show.

Neil was performing at the Tennessee Monsters on the Mountain music festival in Pigeon Forge with his own band, and not Mötley Crüe. Neil was one of the festival's headliners.

LOS ANGELES (KSEE/KGPE) – Hollywood legend Michael Caine claims he is not retiring from acting, despite earlier comments during a recent radio broadcast which appeared to suggest the opposite.

On Saturday, the 88-year-old actor appeared to walk back the remarks he made on BBC Radio 5, taking to Twitter to set the record straight.

Backlog in federal safety rules amid US car crash ‘epidemic’

Daylight saving time ends soon – here’s when we ‘fall back’

1 dead, another injured in shooting on Indy’s northeast side

Stimulus check update: A fourth payment would be critical for many, study says

2 people shot on Indy’s east side

Police: No ‘information to support’ internet rumors of serial killer in Indianapolis

One more round of rain then a huge change underway; Wet, cloudy and warm October to take a break.