KRAKOW, Poland — Eva Kor, a Holocaust survivor who founded the Candles Holocaust Museum and Education Center in Terre Haute, died during a trip to Poland, according to museum officials. She was 85 years old.

The longtime Terre Haute resident was on an annual trip to the country and died peacefully. The Jewish native of Romania was sent to the infamous Auschwitz concentration camp in 1944, where most of her family was killed. She and her twin sister survived; both were subjected to medical experiments.

Her museum released a statement:

Eva Kor has touched hundreds of thousands of people over her 85 years through her message of overcoming tragedy, finding forgiveness, and healing. Surviving the Holocaust at age 10 meant that Eva emerged from a childhood full of fear, loss, grief, and displacement. She and her twin sister, Miriam, were the sole survivors of her immediate family, losing two sisters, her mother, and father on the selection platform at Auschwitz. In addition, she and Miriam were put through the horrific and inhumane experiments by Nazi doctor Josef Mengele. But rather than allowing the darkest moments of her life to define her, she moved forward headfirst into a life of purpose.

Kor dedicated her life to educating others about the Holocaust and became an advocate of forgiveness. She moved from Israel to Terre Haute, where she learned to speak English and raised two children. She worked in real estate for three decades before coming to terms with her tragic history and working tirelessly to educate others and heal.

“We hope Eva’s story continues to change the lives of those who hear it for many years to come,” the museum said.

Kor served as the grand marshal of the 2017 IPL 500 Festival Parade and received an honorary degree from DePauw University in 2018. She was also set to receive an honor from the Indiana Historical Society this summer. She was also the recipient of the 2017 Sachem, the state’s highest honor.

“The world just lost a giant with Eva Kor’s passing. Janet and I loved and adored her. Everywhere she went, Eva brought light into darkness and provided comfort to those in pain unlike anyone we’ve ever met. From her against all odds survival as a young girl in Auschwitz to her peace spreading message based from home in Terre Haute, Indiana, her relentless and optimistic example inspired the world. Her angelic spirit will live on in the countless souls she saved from ongoing confusion and torment. Janet and I are reminded just how blessed we are to have her as a friend. We will miss her laughter, her wisdom and her passion. We call on every Hoosier to look above on this Independence Day and say a prayer for Eva and the family and nation she leaves behind.”

We are deeply saddened to announce the passing of Eva Kor, Holocaust survivor, forgiveness advocate, and founder of CANDLES Holocaust Museum and Education Center. Eva passed peacefully today, July 4th, 2019, at 7:10am local time in Krakow, Poland on the annual CANDLES trip.

The 500 Festival released a statement and provided pictures for this photo gallery:

“Eva Mozes Kor was a treasured member of the 500 Festival family. She was our Grand Marshal, our Pacesetter, our favorite Red Carpet guest, but most importantly, she was our hero. Eva lived a life based in hope, forgiveness, courage and selflessness and worked tirelessly to share her message of healing. She made her community, the State of Indiana and the world a better place. While our staff, volunteers, spectators and participants will deeply miss Eva, it is our great honor to continue her legacy of compassion, hope, resilience, and respect. We are #TeamEva.”

The Indianapolis Jewish Community Relations Council released the following statement regarding the passing of Kor: 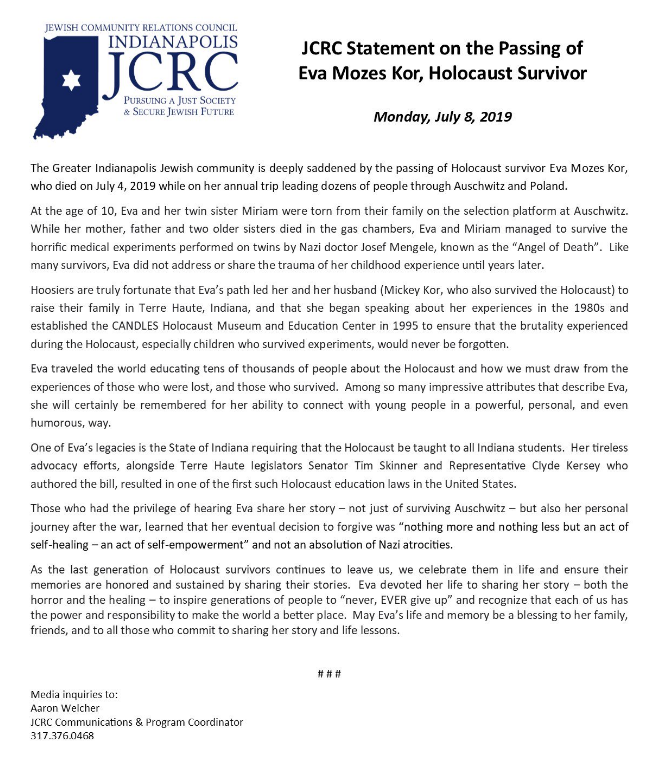 A central Indiana woman is on a mission to help families in need city-wide.

After hearing the tragic story on FOX59 of one family who lost everything in a fire, she's added them to her efforts to give back.

NEW YORK (AP) — New York City, long a beacon for immigrants, is on the cusp of becoming one of the largest places in the country to give noncitizens the right to vote in local elections.

Legally documented, voting-age noncitizens comprise nearly one in nine of the city's 7 million voting-age inhabitants. Under a bill nearing approval, some 800,000 noncitizens would be allowed to cast ballots in elections to pick the mayor, City Council members and other municipal officeholders.

HONOLULU (AP) — From the empty shores of Oahu’s Waikiki Beach to the snowy summit of the Big Island’s highest peak, an unusually strong winter storm is clobbering the Hawaiian Islands and raising the threat of dangerous flash floods, landslides and crashing tree limbs.

The strong storm over the nation’s only island state left eloping couples without weddings and tourists stuck indoors. It also threatened the state’s infrastructure with a deluge of rain and wind.

‘Cheugy,’ Kelce among most mispronounced words in 2021

IFD: No one hurt as 3 people, 2 dogs escape near northwest side fire

Three swastikas found painted in Bloomington over the weekend

Unvaccinated patients would pay their own hospital bills under new proposal

‘Cheugy,’ Kelce among most mispronounced words in 2021

IFD: No one hurt as 3 people, 2 dogs escape near northwest side fire