INDIANAPOLIS, Ind. — Several homeowners on the south side of Indianapolis believe an arsonist is responsible for destroying a car, damaging a home, and trying to trap a family inside the home.

They also think the same person tried setting fires at six other homes in the same area.

According to officials, IFD was dispatched to the 1600 block of Lawrence Ave around 1:40 a.m. Sunday, June 23 and located a car with the engine compartment on fire.

After extinguishing the fire, the homeowner and his girlfriend showed firefighters several additional areas around the residence that looked like unsuccessful, attempted points of ignition.

Firefighters were also told that a “Good Samaritan” alerted them to the fire, but was gone by the time IFD arrived.

Homeowner, Christina Bullock says whoever set the fires also tried to trap her family members inside the house by propping lawn chairs and other items against the front and back doors of the house.

“My family could have easily died yesterday,” Bullock said.  “And then it kind of turns into frustration and anger that who could do that?”

IFD/IMPD investigators were alerted and arrived on scene around 2:30 a.m.  Neighbors on the street say the suspect returned to the area around 4:00 a.m. and chased him on foot.

Since the Sunday morning fire, Bullock says she has heard from six nearby neighbors about apparent attempts to start fires on their properties.

Next door, a woman says somebody had piled seemingly random items up against her wooden privacy fence.  The items smelled like gasoline, she said.  A gas can had been taken from her garage and left out on the driveway, she said.

Bullock says it appears the suspect used seat cushions from lawn furniture to set fire to the back of her house.  She also said the same person tried to ignite a tarp and other items near the gas tank of her daughter’s car.

“The way he was going house to house and yard to yard, he obviously had some sort of plan,” Bullock said.  “Mass destruction just to see how much chaos he could cause?  I really don’t know.” 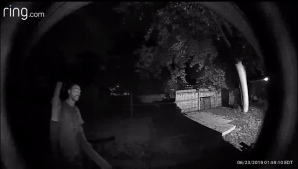 A few houses down from Bullock, Marvin Selva believes his Ring doorbell camera captured the arsonist on security video.  The video shows a young male carrying various yard and household items across Selva’s yard around the same time as the Lawrence Avenue fire.  The video also shows police officers searching in Selva’s yard at the time the suspect was reported back in the area.

Selva believes the same young male took the propane tank from his outdoor grill, and left a seat cushion under the gas tank of his truck.

Selva and other neighbors believe recent heavy rain left most of the yard items too wet to really catch fire.  Now they’re hoping he won’t come back.

“What was his intention,” Selva said.  “I think it’s fair to say he was trying to hurt people, and that worries me.”

“It’s just very mind boggling, very scary that somebody was thinking this through to see how much mass destruction he could do in one night,” Bullock said.

The case is under active investigation and officials are asking anyone with information to call Crime Stoppers at 317-262-TIPS (8477).

INDIANAPOLIS -- A baby suffered what police are calling a "graze wound" during a shooting on the northeast side of Indianapolis, according to the Indianapolis Metropolitan Police Department.

IMPD was called to the 3900 block of Breen Drive around 6:40 p.m. Tuesday in response to the shooting.

INDIANAPOLIS — As teenagers transition from school to the summer, many of them will be looking for a summer job, only to find out opportunities are more scarce this year.

“Kids are anxious to work, it’s just a case of do their parents feel like it’s safe enough for them to get out there. Also, there are less jobs out there right now. I would say the majority of them are scaling back and not hiring as many youths because of restrictions through the CDC,” said EmployIndy In-School Youth Initiatives Director Erika Seydel-Cheney.

Study: U.S. opioid overdose deaths down; pandemic could change that