COLUMBUS, Ind. (Feb. 3, 2015)– A high school basketball star is recovering after being seriously injured in a weekend car crash. Now, his future college teammates are sending him a special message. 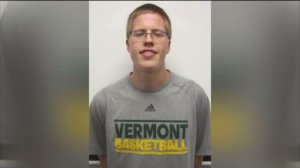 Josh Speidel, 18, suffered head trauma and internal injuries Sunday night during a crash in Bartholomew County. Police said Speidel had to be extricated from the car he was driving. He is currently in critical but stable condition at Methodist Hospital. Speidel is in coma, but FOX59 was told he has been able to move his arms and legs.

Speidel plays for the Columbus North High School Bulldogs. He plans on attending the University of Vermont in the fall on a basketball scholarship.

His future teammates in Vermont posted a YouTube video Monday night wishing Speidel a speedy recovery. The basketball players even did a cheer in honor of Speidel – chanting the phrase “Josh Strong.”

Tuesday, Speidel’s parents spoke to FOX59 News and thanked the public for the outpouring of support.  They said they know his recovery will be long.

Tuesday night, the Columbus North Bulldogs will play Hamilton Southeastern at 7:30. A dinner at 5 p.m. in the school’s cafeteria will kick off the game.  It is $5 to eat, and the money raised will go towards Speidel’s medical expenses.

MIDDLETOWN, Ohio (WDTN) -- A 6-year-old boy was killed and dumped in the Ohio River, and his mother and her boyfriend have been charged, police say.

Middletown police said James Hutchinson was reported missing Sunday by his mother, Brittany Gosney, 29, but when questioned further, she and her boyfriend, James Hamilton, 42, said the child had been killed in Preble County a few days prior.

INDIANAPOLIS – With just weeks before Hinkle Fieldhouse hosts several games during the NCAA Men’s Basketball Tournament, Butler’s Blue IV has proclaimed himself the "Mayor of March."

Butler’s mascot Blue is stepping up to make sure his followers around the country don’t miss a minute of March Madness.

INDIANAPOLIS-- The Indiana State Department of Health (ISDH) announced Monday that more than a million Hoosiers have received their first COVID-19 vaccine dose.

Send us your questions for Indiana’s congressional delegation for our special town hall: ‘IN Focus: Path out of the Pandemic’