Indiana State Police say since 4 a.m., they’ve responded to 121 crashes and 34 slide-offs. Ten crashes resulted in injuries and one crash on I-70 in Greenfield was deadly. 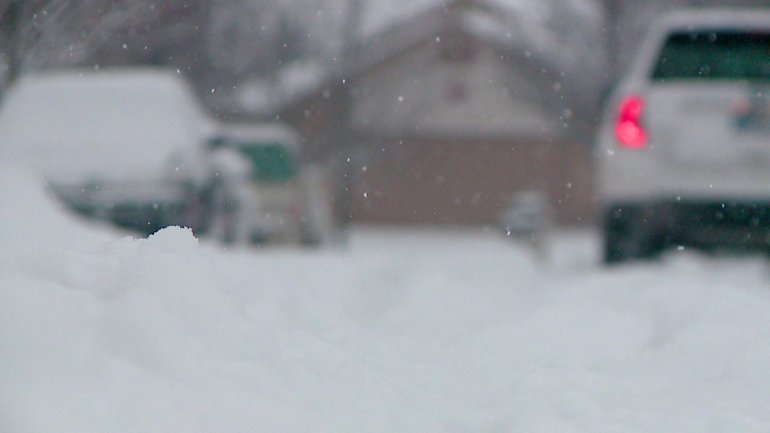 Police say the roads are dangerous and will continue to be dangerous over the night. They’re urging everyone to stay home if they can.

"The roads are in bad shape. People are not heeding the warnings. They are getting out and about even those that don’t necessarily need to," Sgt. John Perrine said.

Sgt. Perrine says many drivers have been driving recklessly and some have no regard for anyone else on the road.

"We do everything we can to prevent those kinds of things, but we just can’t. We can’t drive the car for them. They make the choices to drive the way they do and because of that, we end with more than 100 crashes and people getting seriously hurt or killed," Sgt. Perrine said.

With many Hoosiers still braving the roads, they had to clear a path to get out of their homes. Some hired plow trucks to help them finish the job.

"They’re like an Uber for snow removal and lawn mowing service," Chris Cooke with Plowz and Mowz said.

Finally, after a season of no snow customers are calling for help.

Cooke said the number of calls has been low today, but he’s already starting to get booked for Sunday.

State police want to remind drivers, even after the snow stops, the danger of the roads will continue.

"This isn’t a joke. People are hurt, getting hurt, people are losing their lives, and they are crashing," Sgt. Perrine said.

ISP says if you do have to drive on the roads, give yourself enough time to get to your destination and be careful.

NEW YORK -- CNN anchor Chris Cuomo has been diagnosed with Covid-19, the network said in a memo to employees on Tuesday.

He is feeling well, and will continue to anchor his 9 p.m. program "Cuomo Prime Time" from his home.

INDIANAPOLIS, Ind. -- Governor Eric Holcomb is set to provide the latest information about Indiana's response to the COVID-19 pandemic as the state continues to see cases spread across Indiana's counties.

On Tuesday, state health officials say an additional 14 people died in Indiana from coronavirus-related illnesses. This brings the state's total to 49.

ROCHESTER, NY — A hospital in New York said a man with a coronavirus symptoms lied about his health so he could join his expectant wife in the maternity center, the Democrat & Chronicle reports. UR Medicine told the public about the incident on Monday when they announced they would begin taking the temperatures of all visitors allowed into Strong, Highland and three other affiliated hospitals with maternity services. The…