Skip to content
Breaking News
Breaking News
One dead after shooting near Canal
This is an archived article and the information in the article may be outdated. Please look at the time stamp on the story to see when it was last updated.

INDIANAPOLIS, Ind. – An Indianapolis man killed in a crash Monday afternoon involving a Lawrence squad car was a pastor emeritus at Holy Cross Lutheran Church, and he was a longtime member at the church with his wife.

Norman Elling, 86 and his wife, Selma Elling, 87, were in the process of turning left from westbound Pendleton Pike onto southbound Mitthoeffer Road when an officer heading east on Pendleton Pike crashed into them on the passenger side at the intersection.

Selma, the passenger, died shortly after the crash, and Norman, the driver, died Monday night at Methodist Hospital.

The officer suffered a minor laceration, and a K9 officer in the squad car was not injured. 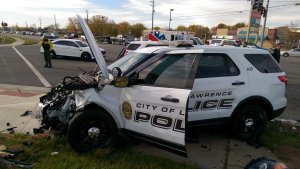 Lawrence Police Deputy Chief Gary Woodruff confirms the officer involved in the accident had his lights off because he was heading to a shoplifting call, and it was not an emergency run.

The officer had his blood drawn last night, and the results should be in today.

At this point, it appears the couple turned in front of the officer, according to Woodruff.

Lawrence police have enlisted the help of IMPD to assist as they continue their investigation.

According to Associate Pastor David McClean at Holy Cross Lutheran Church, the Elling’s were longtime members and Norman was a pastor emeritus. Elling served the Lutheran church for the past 61 years in congregations in Illinois, New York, and Indiana.

MUNCIE, Ind. -- Indiana State Police are investigating after a deadly officer-involved shooting in Muncie.  Muncie Police were called out just after 2 a.m. for reports of a suicidal person, whom they found in an alley near 14th and High Streets. Officers discharged their weapons during the encounter, wounding the person. The person was taken to a nearby hospital were they were pronounced dead.  State Police say a knife and…

911 operators received a call in reference to the shooting shortly before 3:30 a.m.