INDIANAPOLIS, Ind. (Nov. 30, 2015) - Members of the public gathered for the first of three meetings this week to ask questions and voice concerns about the future of I-69 between Martinsville and Indianapolis.

Officials with the Indiana Department of Transportation have scheduled three public meetings this week. Each of the meetings will include an open house session starting at 6 p.m., followed by a formal INDOT presentation at 7 p.m. The meeting dates and locations are:

INDOT Spokesman LaMar Holliday said people attending the meetings will get a chance to learn new details about each of the five possible routes being studied for the future I-69 extension.

“We’re talking about proposed interchanges, access roads, overpasses and underpasses and the kind of footprint of the interstate,” Holliday said.

In June, INDOT announced they had whittled down the list of fourteen possible routes to five. Each of the five routes uses State Road 37 to travel north from Martinsville before splitting off to the west at different points to merge with I-465. 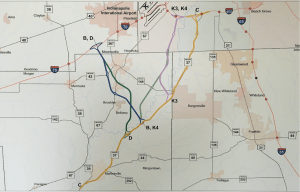 Earlier this year, state lawmakers lifted a ban on I-69 construction through Perry Township in Marion County. That cleared the way for one possible route along SR 37, directly to I-465. INDOT officials expect to decide on the final route in 2017, then send the final plans to the federal government for approval. Holliday said that approval process could take a year or two, so construction may not actually begin until 2019.

“We’ve reduced the number of potential routes from 14 down to five and now we’re providing more information about the potential locations,” said INDOT’s Will Wingfield. “We’re getting a lot more detail and updated information, that we’re using to get input on from the public.”

Still, some people at Monday’s meeting aren't happy with some of the possible plans.

“I can’t understand why they don’t take it straight up 37 like it was proposed in the first place,” said resident Jim Rodocker.

Others oppose a plan that would take the final stretch of I-69 through the Mooresville area.

Joe Inabnitt, who has owned Approval Auto Credit at the corner of State Roads 37 and 144 for 20 years, believes two of the routes could end his time at that location.

“If it does follow 37, there will clearly be an interchange here and they will clearly have to take all this property,” Inabnitt said.

If that happens, Inabnitt says he’ll have to decide what he wants to do.

“Being in business 25 years at this location, maybe I’ll try a different location or sell the business to somebody else,” Inabnitt said.

Denise Fletcher, who owns property off State Road 37 about eight miles north of Martinsville, also expects to be impacted by future construction.

“I don’t know that they’ll buy my property, but there will be an access road probably next to it, which will be heavy traffic.”

Holliday said people attending the meetings this week will be able to voice their concerns after seeing the updated plan details.

“They’ll be able to look at that, assess that, and provide you know, I like this interchange here, or I think you should put the interchange there,” Holliday said.

Holliday said the overall study of the possible routes is factoring in the impacts on individual property owners and public services.

Aside from the meetings this week, INDOT officials are also taking online comments on the I-69 Section 6 project through December 17. You can do that and read more about the project by using the web form here.

The stars of IndyCar were in Florida preparing to start their season when the coronavirus pandemic slammed the brakes on those plans 48 hours before the green flag.

PORTLAND, Maine (AP) — Eric Pray is used to shipping seafood all over the country. But since the coronavirus took hold, he has shifted his focus closer to home — selling lobsters from a homemade tank in his garage.

Pray, of Portland, Maine, is one of hundreds of fishermen, farmers and food producers who have shifted to a direct-to-consumer model amid the virus outbreak. The pandemic has stressed and sometimes disrupted supply chains, shuttered restaurants and changed the way consumers buy food, leaving some producers scrambling for a new way to reach their customers.

NEW YORK (AP) — Gap is being sued for refusing to pay rent for stores temporarily closed during the coronavirus pandemic.

Charges filed for weekend murder and looting in downtown Indy