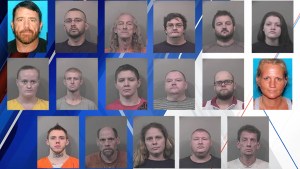 Officers from the U.S. Marshals/Great Lakes Regional Fugitive Task Force led the raid, which involved more than 50 officers and led to 20 arrests.

“It’d be alright with me if 3 months from today we had 20  more people that we were going to after because our goal is to get people off the street. When we do that, hopefully (we’ll be saving) lives,” Johnson County Sheriff Doug Cox said.

The arrest warrants were based on undercover investigations from narcotics detectives at the Johnson County Sheriff’s Office. The detectives completed a number of drug transactions in Edinburgh and surrounding areas. Sheriff Cox said most of the people who were arrested lived in Edinburgh.

“It just so happens that our narcotic investigators found people that (were) willing to give up information on folks in Edinburgh,” Sheriff Cox said.

Sheriff Cox said besides meth and heroin, they have noticed recent issues with prescription pills and painkillers.

“Narcotics (are) the reason why a lot (of) other crimes occur in our communities,” Cox said.

The following individuals were arrested:

Some people being sought were not captured, and the investigation remains open.

(NEXSTAR) – Superman will now fight for “truth, justice and a better tomorrow.”

On Saturday at DC’s FanDome event, DC Comics officially announced that Superman’s longtime motto — “truth, justice and the American way” — was being updated to better reflect his international storylines and appeal.

(WJW) – Mötley Crüe singer Vince Neil accidentally stepped off stage during a concert on Friday and broke his ribs, a guitarist for Neil's band appeared to tell attendees in footage taken during the show.

Neil was performing at the Tennessee Monsters on the Mountain music festival in Pigeon Forge with his own band, and not Mötley Crüe. Neil was one of the festival's headliners.

LOS ANGELES (KSEE/KGPE) – Hollywood legend Michael Caine claims he is not retiring from acting, despite earlier comments during a recent radio broadcast which appeared to suggest the opposite.

On Saturday, the 88-year-old actor appeared to walk back the remarks he made on BBC Radio 5, taking to Twitter to set the record straight.

Backlog in federal safety rules amid US car crash ‘epidemic’

Daylight saving time ends soon – here’s when we ‘fall back’

1 dead, another injured in shooting on Indy’s northeast side

Stimulus check update: A fourth payment would be critical for many, study says

2 people shot on Indy’s east side

Police: No ‘information to support’ internet rumors of serial killer in Indianapolis