INDIANAPOLIS, Ind. — Former and current IPS teachers are reacting to a Facebook post showing a drastic climb in district resignations over the past five years.​

Andrew Polley is one of many who have commented on some version of the picture.

Polley taught 10th grade English for IPS for six years. It was the job he felt called to do, so he gave his sweat blood and tears to teaching and helping his students.

But he says that went unnoticed. He became emotional when talking about how he felt the lack of support from administrators drove him away.

He believes teachers became scapegoats for all ills in the schools and were rarely given a chance to provide context to issues in their classrooms.

“Don’t sit there and sit down and start typing away notes and not give any feedback or anything at all except an emailed evaluation three days later,” said Polley. “It’s unfair.”

In comments on one of the posts, Polley is among many sharing similar stories of frustration. They say the picture comparing resignations year-over-year for certified personnel show they’re not alone in feeling so.

In 2013, there were 212 resignations by certified personnel, those whose jobs require teaching certifications. 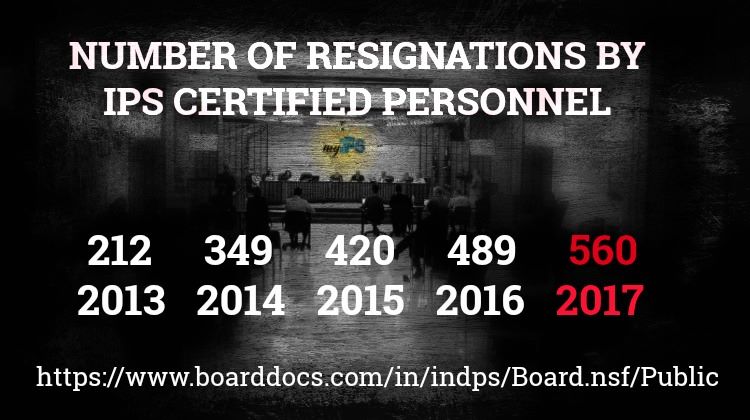 Although IPS questioned the numbers, I checked the math myself using publicly available IPS personnel reports for each calendar year.

The numbers checked out.

The trend in rising resignations began in 2014, before the trend toward Innovation Network Schools picked up steam. Nor does it explain why in some years, the increase in resignations happened primarily during the school year.

And Polley believes things may only get worse.

“I still know a lot of teachers at Tech and even ones that have been told they’re going to be asked back, they’re looking,” said Polley. “They want to get out because it’s that bad.”

Since one teacher left in 2016, he says he’s seen more and more teachers and support staff leave than ever before.

Like Polley, he feels bad about the impact his and the many other resignations may be having on students, especially the many frequently dealing with loss and trauma at home.

“A lot of times that teacher that they’ve developed a relationship and cared about was that real vessel of stability and for that student to lose that, that’s very damaging to the student.”

But at the end of the day, he, Polley and many others say they had to balance their health and well-being and that of their families and the passion they felt for teaching their students.

“It would’ve been easy to keep me,” said Polley. “Just don’t make my life a living hell while I’m at work. Get out of my way; let me teach. Stay out of my classroom; let me teach.”

IPS issued the following statement regarding the teacher vacancies:

Indianapolis Public Schools values and respects the hard-working teachers who lead our classrooms every day. Under current leadership, we have increased compensation while also expanding training and leadership opportunities. It is disingenuous to compare teacher resignation numbers in recent years as we work to re-start schools, convert others to a different model, and streamline the district by closing schools that are too costly. As always, we welcome the constructive input of teachers and other school leaders who want to work with us to make our schools the best possible environment for educating our children.

COLUMBUS, Ohio (WCMH) -- Keith Dalton and his crew of football referees say they were recently officiating a high school game, after which they found themselves locked inside a locker room.

Dalton, a high school referee with the Central Ohio Football Association, believes they were locked in over a controversial call made during the Sept. 10 game between Grove City High School and Central Crossing High School. After the call was made, he said, an assistant coach for Grove City came onto the field and was flagged for unsportsmanlike conduct.

(NEXSTAR) – Fall has brought anxiety for parents and students across the country as children return to the classroom without the protections of a COVID-19 vaccine, but the option to get children as young as five fully vaccinated may not be far away.

On Monday, Pfizer said it's prepared to seek emergency authorization for children ages 5 to 12. That's the same clearance that allowed millions of adult Americans to opt for injections in the winter and spring.

2 students taken to hospital after shooting at Heritage High in Newport News, suspect not in custody

Newport News Police Chief Steve Drew said the two victims' injuries were not believed to be life-threatening. Both victims were 17 years old. A boy was shot in the side of the face, Drew said. A girl was shot in the lower leg.

Here’s the best night to view the Harvest Moon

2 students taken to hospital after shooting at Heritage High in Newport News, suspect not in custody

Here’s the best night to view the Harvest Moon