According to the Indiana State Police (ISP), troopers stopped a Silver Chevrolet Tahoe for speeding on I-65 in Scott County on Monday around 10 p.m. 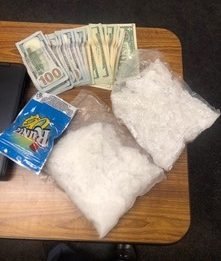 Police said the driver was identified as Derek Ellis, 39, of Indianapolis, and was found to be wanted out of Marion County.

According to ISP an investigation found two lbs of suspected methamphetamine and a small amount of marijuana.

Ellis, and his passenger, Tyesha Bell, 31, also of Indianapolis, were arrested and taken to the Scott County Jail.

WEST LAFAYETTE, Ind. — As students head back to local colleges for in person studies this Fall, universities are requiring negative COVID-19 tests for students to get back on campus.

“I took mine at Purdue,” details Christian Nichols who is already on campus, “They provided the test for me, but a lot of people have mailed their test in to come in in the fall.”