UPDATE (9/21/22): Brandon Kaiser was found guilty of numerous charges including several counts of aggravated battery and battery by means of a deadly weapon. He will be sentenced on Oct. 21, 2022.

Brandon Kaiser was one of two men involved with a fight outside a downtown White Castle during which shots were fired and Judge Brad Jacobs and Judge Andrew Adams of Clark County were struck.

Court documents show attorneys have submitted a notice of affirmative defense, claiming Kaiser was justified in using reasonable force against another person to protect himself. 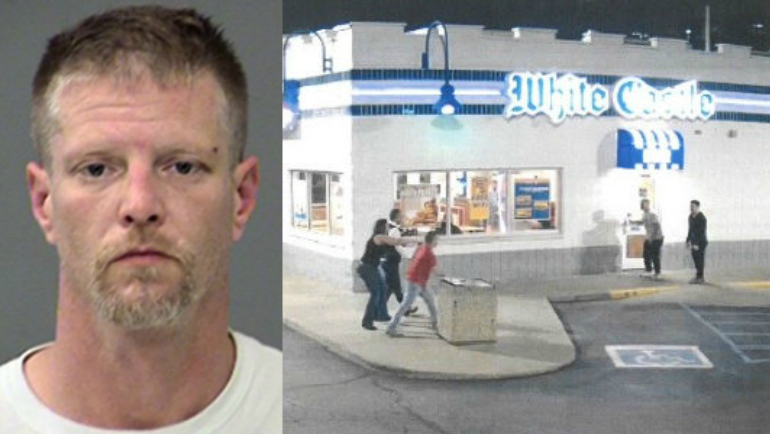 Attorney Mario Massillamany (Massillamany Jeter & Carson LLP) said Kaiser had a legal right to be at the restaurant, and “did not provoke, instigate or participate willingly in the violence of his assault, and did not make physical contact with his attackers until it was necessary in order to protect himself.”

Court documents show that attorneys for Kaiser are also claiming the defendant “used reasonable force to protect himself because he was attacked by two men with military training.”

Still images from security cameras have been submitted as evidence, and Kaiser’s attorneys described what they claim took place during the altercation in the court documents:

Exhibit A: Massillamany claims Kaiser was attempting to enter White Castle by pulling on the locked door when Judge Adams and Judge Jacobs approached him in a hostile manner.

Exhibit C: Court documents show the defense said Kaiser was kicked in the head by Judge Adams while being held down by Judge Jacobs.

Exhibit F: Kaiser suffered severe injuries to his face and body as a result of the attack, according to his attorneys.

Workout gloves come in a variety of styles. Some have a minimalist design with a slim build and open back.

Whatever type of weight bench you prefer, there are many things to consider when choosing one, including the weight limit.

When will Tyre Nichols video be released?

DOG REUNITED WITH FAMILY IN ANDERSON

Woman dead in shooting on Indy’s northeast side

Car crashes into house on Indy’s west side

When will Tyre Nichols video be released?

1 dead in shooting on Indy’s northeast side

1 dead in shooting on Indy’s northeast side