That’s what Hulman & Co. CEO Mark Miles wants for the 100th Running of the Indianapolis 500 next year. The Indianapolis Motor Speedway will celebrate the milestone for the race, which is scheduled for May 29, 2016. Organizers unveiled the logo for the event Thursday. 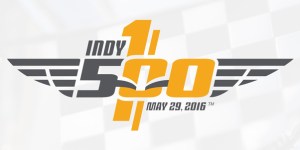 Citing the race’s “illustrious past and an even brighter future,” Miles said the logo got special attention as the race marks the anniversary.

“It’s just hard to express what this race means,” Miles said. “The race in a way is about human achievement and the desire to always push the pedal and to always go farther, faster, to innovate. This place has stood for that for all these many years, and we want to celebrate that in a big-time way.”

Miles said fans at this year’s race will have the chance to buy hats, t-shirts and other merchandise in anticipation of the 100th running. He called it a yearlong celebration and said he invited anyone associated with the race to come to town, including former drivers.

“We’re going to make this Super Bowl-like in May 2016,” Miles said. “We think that people will be eager to find a way locally…to get involved and be part of the celebration.”

Allison Melangton, who had a hand in organizing Indianapolis’ well-regarded effort as a Super Bowl host city, said the first thing people do when they learn she’s from Indianapolis is to ask her about the race. She says it’s important to recognize the local, national and international importance of the race.

“We are the Greatest Spectacle in Racing,” she said. “We want to make sure that globally, nationally and locally that we claim that.”

She highlighted the importance of reinforcing the Indianapolis Motor Speedway’s status as the world’s premier racing facility. She said the effort to raise awareness for the 100th running will begin Monday.

A.J. Foyt, the legendary driver and four-time Indy 500 winner, said the allure of the race is unmistakable.

“I dreamed of this,” he said of attending his very first Indy 500. “I was sitting there in (turn) two and I was thinking, maybe someday I’ll be fortunate enough, lucky enough to have a car to come up here.

INDIANAPOLIS -- State Representative Steve Davisson has passed away after a battle with cancer, according to officials.

Davisson, of Salem, was first elected in 2010 to serve House District 73, which includes all of Washington County and parts of Clark, Harrison, Jackson, Lawrence and Orange counties.

(StudyFinds.org) - Vaccinations can be a controversial subject for many people, especially when it comes to injections. So what if you could replace your next shot with a salad instead? Researchers at the University of California-Riverside are working on a way to grow edible plants that carry the same medication as an mRNA vaccine.

The COVID-19 vaccine is one of the many inoculations which use messenger RNA (mRNA) technology to defeat viruses. They work by teaching cells from the immune system to recognize and attack a certain infectious disease. Unfortunately, mRNA vaccines have to stay in cold storage until use or they lose stability. The UC-Riverside team says if they’re successful, the public could eat plant-based mRNA vaccines — which could also survive at room temperature.

Several officers responded to a welfare check just before 7 p.m. in New Harmony near the Illinois border when a male homeowner allegedly started firing a weapon toward the officers. They returned fire, according to Indiana State Police.

Use of OxyContin profits to fight opioids formally approved