MCCORDSVILLE — A McCordsville family says they feel targeted after receiving a racist letter in the mail.

The Smith family say they don’t know who sent it but believe it was one of their neighbors.

The letter wasn’t signed, and the upper left-hand corner of the envelope read “Neihborhood Assoc.” Neighborhood was spelled incorrectly on it.

The family is calling the letter racist.

“It struck reality for me. Stuff like this is real. Racism is real. It’s an eye opener,” Brookelynn Smith said.

The Smith family was one of the first ones to move into the subdivision three years ago.

“We chose it because it was up and coming, McCordsville was, so we got to meet everybody essentially coming in, and that’s how it’s been,” Wesley Smith said.

So, when Wesley received the letter below on Friday, it came as a surprise. 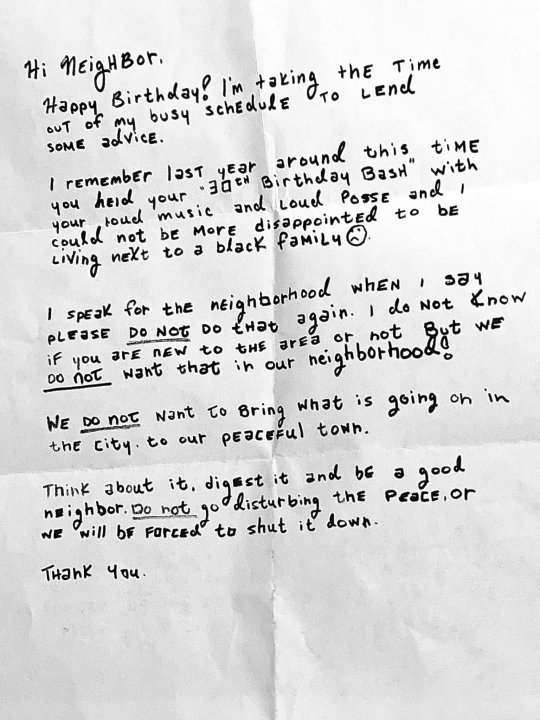 The letter describes a birthday bash that Wesley said neighbors were made aware of and was cleared out by 9 p.m.

“The first thing that came to mind was to think somebody is judging us and putting us into a category based on our skin color,” Brookelynn said.

The Smiths have both experienced racism before. They never thought their three children would be exposed to it so quickly at a place they call home.

“It’s always going to be an uneasy feeling because you just don’t know who said it. Who’s thinking that way about you?” Brookelynn explained.

“We are here to stay, and if you don’t like it, you can get out and leave,” Wesley said.

The Smith family said their neighbors have been supportive and some have hung up signs saying racism isn’t welcomed.

The Smith family is planning on throwing another birthday party at their house in a few weeks.

If you are trying to strengthen the muscles in your shoulders and upper back, the lat pulldown is one of the best exercises to perform.

Rubber hex dumbbell sets are important pieces of workout equipment because they allow you to perform multiple, different styles of lifting and training.

​​One of Pilates’ most attractive features is that it doesn’t require bulky machines like those used in weight-lifting or cardio.

Indy mother describes the moment a car crashed into …