INDIANAPOLIS, Ind – The Indiana Department of Transportation (INDOT) is hosting three public meetings this week to present their final plans to extend I-69 between Martinsville and Indianapolis.

People attending the meetings will have a chance to examine the latest project maps, then hear a presentation from INDOT, then spend an hour visiting various booths where they can ask questions about the project.

The purpose of the meetings is to update residents on the project schedule and address concerns about its impact on traffic and properties surrounding construction, INDOT spokesperson Mallory Duncan said.

The website is being updated with most current maps, construction timelines and an online survey where the public can vote on aesthetic features like bridge barriers and light fixtures.

The $1.5 billion project to complete the sixth section of I-69 is funded by a combination of state and federal funding through Governor Eric Holcomb’s Next Level Connections program. The new interstate is expected to generate $4.1 billion in positive economic impact over 20 years, according to the state’s website. 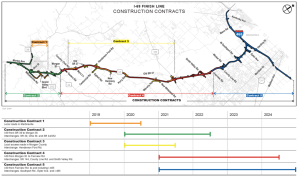 The state is in the process of spending about $272 million to purchase roughly 650 properties along the construction route. That number has changed over the last year due to updates to the interstate’s design.

“They’re in different stages as we move north, whether they’re getting appraised or we’re in the process of buying them,” Duncan said.

In Johnson County, Penny Friend Berty says she and her husband have until January 20 to move out of their home in the Wakefield neighborhood, near State Road 37. She and her husband are currently appealing the state’s purchase and relocation offer.

“I understand eminent domain, so they have the last say. I just want them to be fair because we bought this home to retire,” Berty said.

Berty said an earlier plan involved buying out several homes in her neighborhood. Now she says the plan only involves her home and the home next door.

“We don’t want to move, but we have to, and I still haven’t got a clear answer from INDOT exactly why they need to take just these two homes,” Berty said.

David Bleke, owner of Bleke’s Center Grove Tire near SR 37, said he was previously told his business property could be purchased by the state. However, the latest design does not involved buying his property. Bleke says he almost wishes his property would be bought so he could be relocated to a more accessible location. He’s concerned about being surrounded by construction, cutting his customers off from his shop.

“Well, I don’t think it’ll be good for it,” Bleke said. “I’m sure my numbers will drop considerably just by the simple fact they can’t get here.”

Duncan said construction plans will include plenty of public notice about detour routes and local access roads to get around construction.

“Not only will these business owners know that their business might be along the line, but the public will know as well,” Duncan said. “And locals will find a way around.”

Those new cases were reported to ISDH between October 15 and October 29 and come following corrections to the previous day’s dashboard.

INDIANAPOLIS-- Police released surveillance video Friday in connection with a hit-and-run crash that killed a 1-year-old boy and injured his 9-year-old sister.

McRib is back: McDonald’s fan-favorite available nationwide for first time since 2012

Where is Sherman: Indy Scream Park

Tips for celebrating Halloween amid the pandemic

Marion, Hamilton County officials urge voters not to return their ballot by mail

McRib is back: McDonald’s fan-favorite available nationwide for first time since 2012

Where is Sherman: Indy Scream Park