CONNERSVILLE, Ind. – A mother of five in Connersville made a life-saving donation to an 8-year-old after the two met at Vacation Bible School.

“They asked all the kids ‘What are your goals in life?’, and she was 8 at the time,” said Kari Woods. “When they asked her, she said she wanted to live to be 10.”

Woods was a volunteer at Vacation Bible School in the summer of 2017 when she learned 8-year-old Abby Steinard was suffering from kidney failure.

Steinard was on dialysis for nine and a half hours every day.

Woods learned Steinard has a rare blood type, so finding a donor was even harder.

“They said her blood type is O Negative, and I said, ‘Well that’s my blood type, and I only need one kidney.’”

In December 2017, the mom of five checked into St. Vincent Hospital for the surgery that saved Steinard, who was 9 at the time.

“She started to get her color back probably on the second day, and then the activity level. By the end of the hospital stay, she was roaming around on the floor,” said Dr. Islam Ghoneim, who performed the surgery.

Dr. Ghoneim said Woods is healthy, and that helped her recovery. 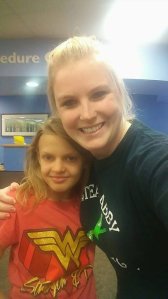 Steinard will take lifelong anti-rejection medication and has regular doctor visits, but she is no longer on dialysis. She says she plans to have fun with friends on the rest of summer break.

“Hoping to have a water gun fight with my friend Brody,” she said.

It’s a notable change from this time last year. “When I play with Brody or Faith and Jacob, I don’t run out of energy that much.”

She now says that when she grows up she wants to be either a veterinarian or a zookeeper. Until then, she gets a new stuffed animal at each doctor’s appointment.

“One is a regular tiger and then the other is a snow tiger,” Steinard said of some of her favorites.

At her six-month check-up in July, she chose a lion.

Steinard’s mom says Woods, who was a stranger and is now family, saved her daughter.

Woods recently announced she is pregnant with her sixth child, and Dr. Ghoneim says that is a testament that donors go on to have normal lives after this life-saving surgery.

Click here to donate to the family’s GoFundMe page to help with medical expenses.

The Indiana Donor Network reports, as of February 2018, 1,280 people are waiting on an organ transplant. Of those, 1,117 are waiting for a kidney.

INDIANAPOLIS -- Police said a man is dead after officers were called to a fight on Clifton Street.

INDIANAPOLIS – The reward for staging one of the NFL’s showcase events at a high level is watching the league taking it on the road.

“It’s one of the unfortunate consequences of success,’’ Jeff Foster said Tuesday afternoon.