INDIANAPOLIS, Ind. — At least two Indiana health departments have stopped distributing free Naloxone kits to the public after a piece inside them was recalled by the manufacturer, possibly rendering them ineffective.

The Indiana State Department of Health gave more than 3,400 of the kits to 20 counties in late August. The kits include the drug Naloxone, which is used to reverse and opioid overdose, as well as an atomizer which allows the dose to be sprayed into a patient’s nose.

The company which makes the atomizers, Teleflex Medical, recalled many of them last week.

On Thursday, the Marion County Public Health Department informed people who received the kits at a free IMPD training on November 3 to stop using them, saying they’re in the process of receiving replacement atomizers.

“We have just been informed that the nasal atomization delivery device (in white bag) has been recalled by the Teleflex manufacturer because it may not deliver a fully atomized plume of medication. At the present time please Do Not Use the Naloxone kit,” the email stated.

FOX59 reached out to the State Department of Health, which confirmed it has also heard from officials in Jefferson County that they had recalled atomizers in their kits.

“All counties that received Naloxone kits through ISDH have been contacted to ensure that they are aware of the recall. At this point, we can’t say how many counties might be affected. … ISDH is working with (distributor) McKesson to arrange shipment of the replacement product to any affected (counties) as quickly as possible,” ISDH spokesperson Jeni O’Malley said. 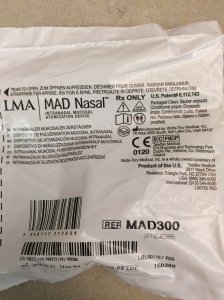 It’s unclear how many counties have been affected, or how many people in the public could already have received potentially defective kits. Marion County had just started handing the kits out last week, and a spokesperson said they expected to get replacements by the next training and hand-out on November 29.

To check if an atomizer contained in a kit is recalled, go to the link here. The product code is near the bottom right side of the packaging, in bold letters.  Then, look for the lot number on the very bottom right.

(CNN) -- It started with a routine police call reporting someone used a counterfeit bill at a store in Minneapolis.

What followed was a series of events that ended with George Floyd, 46, dead after a white police officer used his knee to pin him down in an incident captured on video. Floyd, who is black, died Monday night after he was arrested for the alleged forgery.

Costco announced Thursday that it will bring back free samples beginning in mid-June.

During a company earnings call on Thursday, Costco revealed that a modified sample program will be returning for members.

A white Minneapolis police officer who knelt on George Floyd's neck opened fire on two people during his 19-year career and had nearly 20 complaints and two letters of reprimand filed against him.

Derek Chauvin, 44, became the focus of street protests and a federal investigation after he was seen in cellphone video kneeling on the neck of Floyd, a 46-year-old a black man, for almost eight minutes Monday night during his arrest on a suspicion of passing a counterfeit bill. Floyd, who was handcuffed and heard saying he couldn’t breathe, was pronounced dead later that night.