NEW YORK (CNNMoney - March 9, 2015) -- If you want to buy armor piercing ammo, it's probably too late. The assault rifle bullet M855, known popularly as the "green tip" ammo, has flown off the shelves of gun stores in the last couple of weeks.

"It's gone," said Jesse Bonner, owner of Jesse's Gun Shop in Corsicana, Texas, who had 2,000 rounds in stock recently. "It went pretty quick."

The Bureau of Alcohol, Tobacco, Firearms and Explosives recently announced a proposal to include M855 in its long-standing ban on armor piercing ammunition in order to better protect police officers. 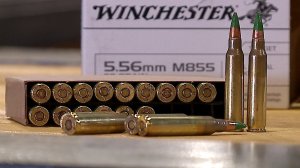 The proposal has fueled a run on the bullets, which were already more expensive than other types of ammunition.

"People were definitely buying it up," said Justin Chancey, manager of Red Hills Arms in Tallahassee, Fl. "We can't get our hands on it anymore. Distributors are out of it."

The green tip ammo costs about $1 a round, compared to other assault rifle ammo, which can cost anywhere from 30 cents to 80 cents a round.

The Gun Control Act of 1968 banned armor piercing ammo, which it defined as bullets with solid cores made from steel, brass and other metals. The ATF modified the rules in 1986 to exempt bullets made for guns with calibers that were larger than .22. That would include the popular assault rifles, which typically use .223 caliber ammo.

The latest proposal will take away that exemption.

Any threat of a ban usually causes a boon in firearm and ammo sales. This is what happened when President Obama tried to restrict assault rifles in 2013 following the killing of elementary school children in Newtown.

"We are hearing and seeing reports that ATF's proposal has caused a run on M855," said Larry Keane, senior vice president and general counsel for the National Shooting Sports Foundation, the gun industry group, said the ammo is clearing out nationwide.

The ATF has invited people to submit comments on the proposed ban up until the March 16 deadline.

Gun advocates argue that the ban will do little to protect cops.

The gun shop owner Bonner said that all assault rifle ammo can go through personal body armor, not just the green tips.

A U.S. Army official and a senior U.S. intelligence official say the two National Guard members have been found to have ties to fringe right group militias.

WILMINGTON, Del. (NewsNation Now) — President-elect Joe Biden is heading to the nation's capital one day before he's officially sworn in as the 46th president of the United States.

Biden and incoming first lady Dr. Jill Biden are slated to attend a send-off event in Wilmington, where the president-elect has been coordinating policy plans and appointing roles within his administration during the transition period.

(NEXSTAR) -- On the campaign trail and in the weeks leading up to Inauguration Day, President-elect Joe Biden has announced a series of executive orders he intends to issue on his first day in office.

On Wednesday, following his inauguration, Biden will end Trump's restriction on immigration to the U.S. from some Muslim-majority countries, move to rejoin the Paris climate accord and mandate mask-wearing on federal property and during interstate travel. Those are among roughly a dozen known actions Biden will take on his first day in the White House, his incoming chief of staff, Ron Klain, said in a memo to senior staff.