IOWA CITY, Iowa – Pokemon Go and a bank robbery nearly led to disaster for a football player from the University of Iowa last week.

Defensive lineman Faith Ekakitie, 23, was playing the popular game when five police officers confronted him Wednesday; four of them pointed guns at him. The officers were investigating an armed robbery that happened nearby minutes earlier, and investigators said Ekakitie matched the description of the suspect: a large black man wearing all black with something on top of his head.

As a 6’3”, 290-pound defensive lineman, Ekakitie fit the description. The officers approached him from behind; he was wearing headphones and didn’t hear them at first. Ekakitie wrote about the experience on Facebook.

They quickly move to action and identify themselves as the Iowa City police and ask me to turn around and place my hands up. I do not comply, they ask again, and again no response from me. So they all draw their guns and begin to slowly approach the suspect.

He said he didn’t hear the police officers at first because music was blaring in his headphones. He said he understood why the officers drew their weapons; he didn’t respond to their orders and reached into his pocket for his phone. For all the officers knew, he could’ve been reaching for a gun. The suspect from the robbery had been armed.

The suspect had reached into his pockets, for something which was his phone, but for all the cops could have known, he was reaching for a gun. The suspect could very well become another statistic on this day. I am not one to usually rant on Facebook or anywhere else, but with all of the crazy things that have been happening in our world these past couple of weeks it is hard to stay silent. I am thankful to be alive, and I do now realize, that it very well could have been me, a friend of mine, my brother, your cousin, your nephew etc. Misunderstandings happen all the time and just like that things can go south very quickly.

Ekakitie said it’s important to remember that “not all police officers are out to get you” and that “not all people who fit a criminal profile are criminals.” He closed his account of the incident with this:

So with that, I would like the thank the Iowa City Police department for handling a sensitive situation very professionally. I would also urge people to be more aware of their surroundings because clearly I wasn’t. Lastly, I would urge us all to at least to attempt to unlearn some of the prejudices that we have learned about each other and now plague our minds and our society. I am convinced that in the same way that we learned these prejudices, we can also unlearn them. 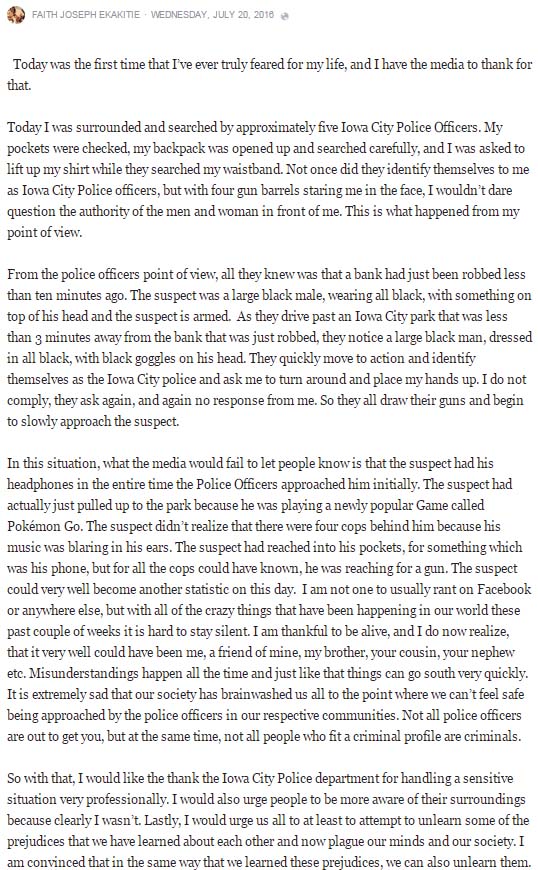 Biden to send $800M in military assistance to Ukraine

Medical staff gear up for Indy 500

Medical staff gear up for Indy 500, prepare for hot …

Worry about stagflation, a flashback to ’70s, begins …

Indy Parks to start summer with half of pools closed

IMPD probes deaths of 2 women on west side

Medical staff gear up for Indy 500