World oil prices have charged higher this week, breaking back above the psychological barrier of $50 a barrel for the first time since July.

As recently as last month some analysts were warning of a risk that prices would collapse to $20 a barrel. What’s going on?

Here are three reasons for the bounce:

Tensions in the Middle East, the biggest oil producing region, have pushed prices up.

Russia launched a military operation in Syria this week, marking the beginning of a new and closer cooperation between Moscow and the Syrian regime of President Bashar al-Assad. The West has criticized Russia for the move.

Investors are worried more violence in the region could impact production and transport. Reports of Russian cruise missiles falling short and landing in Iran haven’t helped settle their nerves. 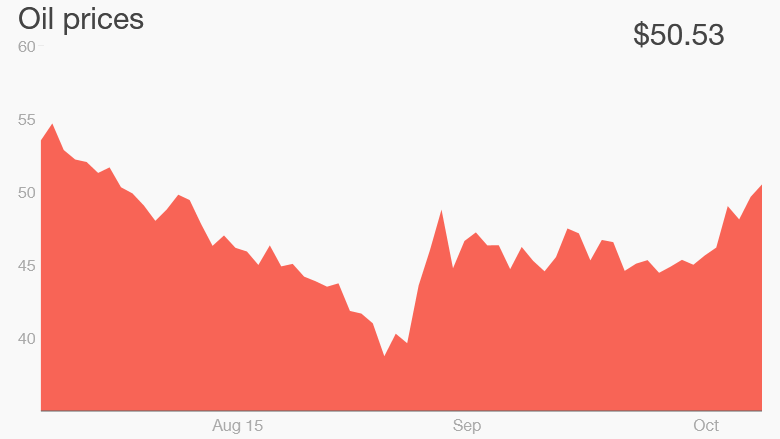 Minutes of the most recent Federal Reserve meeting released Thursday showed the central bank is not in a rush to raise U.S. interest rates. The minutes weighed on the dollar — it was down 0.75% against the euro on Friday — which in turn supported global oil prices.

Oil and other commodities are priced in dollars, so a weaker dollar makes them more affordable meaning prices can rise to compensate.

It said U.S. production will continue declining until the middle of next year, before growth returns in late 2016. The agency also said it expects global demand for oil in 2016 to grow at its fastest in six years — that’s also good for prices.

Oil has been under pressure in recent months, having crashed more than 50% since last summer. Prices fell to their lowest level in six and half years in August, trading below $42 a barrel.

This week’s rally has sparked hope that the market may have finally turned, but some analysts are still cautious.

“We do think that the price of oil will struggle to stay above the $60 level as this will bring on all the rigs which were switched off,” said Naeem Aslam, chief market analyst at Avatrade.

SAN FRANCISCO, Calif. (KRON) -- The Department of Defense on Wednesday released the first images of a COVID-19 vaccination record card and vaccination kits.

The cards will be sent out as part of vaccination kits from Operation Warp Speed, the U.S. government's coronavirus vaccine initiative.

TAMPA, Fla. (WFLA) - A volunteer at Big Cat Rescue in Tampa was seriously injured on Thursday morning when a tiger she was feeding grabbed her arm and "nearly tore it off at the shoulder," officials with the organization said.

Hillsborough County Fire Rescue was called to the park located at 12802 Easy Street in Tampa around 8:30 a.m. for the incident. A public information officer said the person's injury was serious.

WASHINGTON (AP) — President Donald Trump on Thursday called Lou Holtz "one of the greatest coaches in American history” as he honored the college football Hall of Famer and political ally with the nation's highest civilian honor.

Holtz, whose 34-year coaching career included the 1988 national title at the University of Notre Dame, received the Presidential Medal of Freedom during an Oval Office ceremony. Holtz led six different programs to bowl games and is an outspoken Trump backer.

Man dies after being shot on Indy’s near southeast side

Vetting charities: a guide to giving and why you should do your research before donating

Vaccine rollout could ease crisis, but who gets it first?

Man dies after being shot on Indy’s near southeast side

Vetting charities: a guide to giving and why you should do your research before donating