(CNN – Dec. 17, 2014)–  Sony on Wednesday said it would cancel next week’s planned release of “The Interview,” after most of the country’s largest theater chains had decided not to show it.

The decision by Sony follows a threat on Tuesday from anonymous hackers that people should avoid going to theaters where “The Interview” is playing. 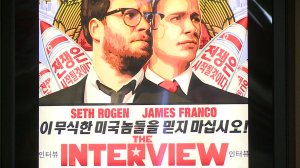 “In light of the decision by the majority of our exhibitors not to show the film “The Interview,” we have decided not to move forward with the planned December 25 theatrical release,” Sony said in its first statement on the matter.

“Sony Pictures has been the victim of an unprecedented criminal assault against our employees, our customers, and our business. … We are deeply saddened at this brazen effort to suppress the distribution of a movie. … We stand by our filmmakers and their right to free expression and are extremely disappointed by this outcome.”

U.S. investigators have determined hackers working for North Korea were behind the Sony hack and an announcement could come as soon as Thursday, U.S. law enforcement sources told CNN.

The comedic film was scheduled to come out on Christmas Day.

Earlier on Wednesday, many of the major theater owners decided to postpone or cancel next week’s premiere.

According to sources with direct knowledge with the situation and statements by some of the companies, among the top chains that had decided to drop the movie were AMC Entertainment, Regal, Cinemark and Carmike Cinemas.

Several smaller chains, including Bow Tie Cinemas and Southern, had decided to do the same thing.

Bow Tie said in a statement that it was “saddened and angered” by the threats against the film. “It is our mission to ensure the safety and comfort of our guests and employees,” it said.

Another chain, Cineplex, which is based in Canada, also said it would postpone its showing.

“Cineplex takes seriously its commitment to the freedom of artistic expression, but we want to reassure our guests and staff that their safety and security is our number one priority,” the company said. “We look forward to a time when this situation is resolved and those responsible are apprehended.”

And Regal said it would “delay the opening” in its theaters, citing “the wavering support of the film “The Interview” by Sony Pictures, as well as the ambiguous nature of any real or perceived security threats.”

“The Interview” became controversial because its plot involves the attempted assassination of North Korean dictator Kim Jong-un. Sony Pictures has been devastated by a cyberattack that appears motivated by anger over the film.

The film’s Los Angeles premiere went off without a hitch last week, but the New York premiere planned for Thursday was called off after the new threat on Tuesday.

Concerns about upholding freedom of artistic expression were countered by fears that families would heed the hackers’ warning and bypass the box office for the remainder of the holiday season.

“The possibility that people will avoid theaters altogether is the problem,” the person said. In other words, it’s not just “The Interview” that could be hurt, it’s other Christmas releases like Disney’ “Into The Woods” and Universal’s “Unbroken.”

Furthermore, according to The Hollywood Reporter, theaters were “wary of becoming liable if they show the movie and any violence occurs.”

To many observers, however, that sounded like a far-fetched scenario.

Daveed Gartenstein-Ross, a senior fellow at the Foundation for Defense of Democracies, said on CNN’s “New Day” that “this is essentially a heckler’s veto” of the film.

While Sony and U.S. government officials have not explicitly accused North Korea of being behind the hacking attacks, he said this seems to be “a foreign power engaging in a cyber-attack against a private actor, a private company, in order to squelch freedom of expression.”

The FBI is investigating the hack, and the U.S. Department of Homeland Security said Tuesday that “there is no credible intelligence to indicate an active plot against movie theaters within the United States.”

All the attention is causing some people to pledge to see the film.

“I am not going to let a terrorist threat shut down freedom of speech. I am going to The Interview,” screenwriter and director Judd Apatow wrote on Twitter Tuesday night.

Amid racial unrest across the nation, President Donald Trump on Monday declared himself “the president of law and order” and threatened to deploy the United States military to American cities to quell a rise of violent protests.

As Trump spoke, an incredible TV split screen developed around the White House. While he addressed the nation in the White House's idyllic Rose Garden, a series of military vehicles rolled out front on Pennsylvania Avenue and military police and law enforcement clashed with protesters at Lafayette Park.

BRYAN, Texas -- Tensions rose across the country as protesters decried police brutality following George Floyd's death last week, but some are calling for peaceful demonstrations, including some of Floyd's children.

Hundreds of people were at a Black Lives Matter demonstration Sunday in Bryan, Texas, including Quincy Mason Floyd, one of George Floyd's sons.

MINNEAPOLIS — A man accused of driving his semi-truck into a group of protesters marching on a closed Minnesota freeway on Sunday has been charged with assault.