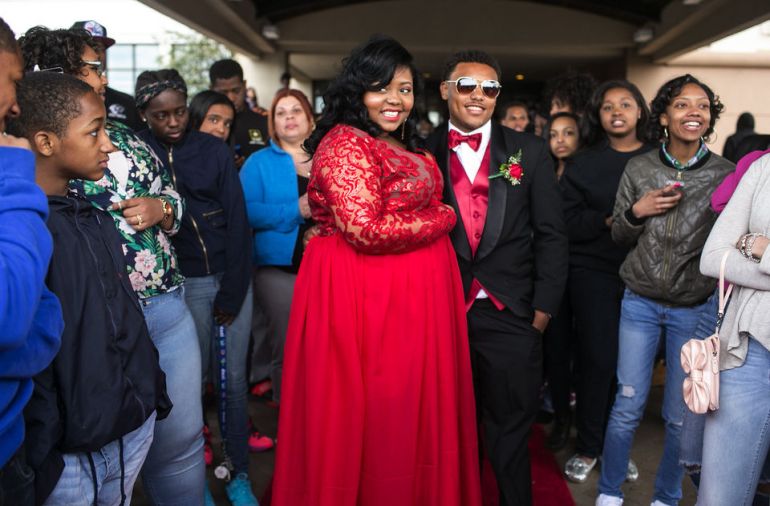 HARRISBURG, Penn. (May 3, 2015)— A high school student was suspended because her prom dress was “too revealing.” But the girl and her mother are very upset about the suspension, according to PennLive.com.

Miller-Wigfall says she was told by her school’s assistant principal at prom that she needed to cover up. Three days after the dance, she said she was notified that she was suspended.

The suspension was reportedly overturned, but the school never contacted the mother about the suspension or why her daughter was suspended in the first place.

The mother is still trying to get answers. The school has not commented on the issue. The mother claims it may be because her daughter is “plus-sized.”

The student’s mother, Alisha Sneed, told PennLive.com that she designed and sewed the prom dress for her daughter with the school’s guidelines in mind. “I couldn’t believe it,” the student’s mother said. “I don’t see anything wrong with that dress. What do they want her to wear, a turtleneck?”

“The Harrisburg School District believes that proms are celebratory and memorable events in the lives of its students.  Our administration, school board, faculty and advisors strive to ensure that students enjoy themselves immensely, while abiding by attire guidelines and expectations that support and promote the elegance of the prom season.”

Authorities say Thang worked in a sushi business at the Kroger store in Collerville, and was the son of refugees from Myanmar who had settled in Nashville, a family friend said Friday.

GLENWOOD SPRINGS, Colo. (KDVR) – A new report out Friday from investigators with the Colorado Department of Labor and Employment found that the 6-year-old Wongel Estifanos was not wearing a seat belt when she died on the Haunted Mine Drop Ride at Glenwood Caverns Adventure Park earlier this month.

According to the report, Estifanos was sitting on the two seat belts instead of wearing them across her lap before the Haunted Mine Drop ride took off.

TAMPA, Fla. (WFLA) - Every day is a new opportunity to learn how to cope with loss. That's exactly what the family of Gabby Petito is trying to do.

On Sunday, the Petito and Schmidt family learned that their daughter was found dead at the site of the Spread Creek campsite in Wyoming, just over a week after reporting her missing.

Do I have fall allergies or COVID-19?

Early morning rain will not ruin a beautiful Saturday

Ancient tablet acquired by Hobby Lobby going back to Iraq

Biden: Budget talks hit ‘stalemate,’ $3.5T may take a while

Huawei executive resolves criminal charges in deal with US

Do I have fall allergies or COVID-19?