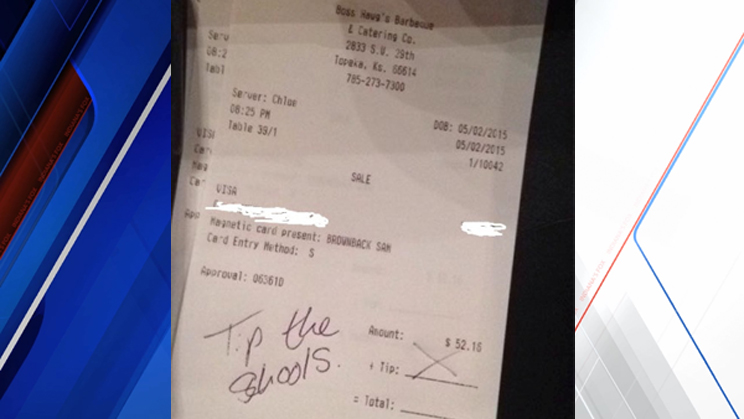 TOPEKA, Kan. (May 4, 2015) – A restaurant waitress didn’t want a tip from Kansas Gov. Sam Brownback. Instead, she asked him to give more money to schools.

Chloe Hough was working her last shift Saturday night at Boss Hawg’s Barbeque in Topeka when Brownback stopped for dinner. She posted a photo on Facebook of the receipt, where she’d crossed out the tip line and written “tip the schools” beside it.

Hough told KSNT that she didn’t know Brownback was coming to the restaurant with his family. She told the TV station she felt like she had to say something or she would regret it.

Kansas faces a budget deficit, and Brownback has cut back on public education. In March, he signed a measure to change the formula for public education funding. The move essentially freezes funding levels for two years. Educators criticized the bill, saying it ignores the needs of individual school districts.

BRYAN, Texas -- Tensions rose across the country as protesters decried police brutality following George Floyd's death last week, but some are calling for peaceful demonstrations, including some of Floyd's children.

Hundreds of people were at a Black Lives Matter demonstration Sunday in Bryan, Texas, including Quincy Mason Floyd, one of George Floyd's sons.

MINNEAPOLIS — A man accused of driving his semi-truck into a group of protesters marching on a closed Minnesota freeway on Sunday has been charged with assault.

Pier 1 is officially closing up shop after receiving approval from a bankruptcy court to cease and liquidate its retail operations.

The troubled home goods retailer had its plans authorized Friday to begin liquidation sales across its 500 remaining stores once they can reopen. Its stores have temporarily closed because of Covid-19.

Some arrests reported as 8 p.m. curfew ends for Marion County

While you were sleeping: Coronavirus updates for June 1