Immediately after the signing, Marc Benioff, the CEO of Salesforce, announced that he is canceling all programs that require his customers/employees to travel to Indiana.

Today we are canceling all programs that require our customers/employees to travel to Indiana to face discrimination. http://t.co/SvTwyCHxvE

In the afternoon, the NCAA released this statement:

“The NCAA national office and our members are deeply committed to providing an inclusive environment for all our events.  We are especially concerned about how this legislation could affect our student-athletes and employees.  We will work diligently to assure student-athletes competing in, and visitors attending, next week’s Men’s Final Four in Indianapolis are not impacted negatively by this bill. Moving forward, we intend to closely examine the implications of this bill and how it might affect future events as well as our workforce.”

These statements come after concerns raised earlier this week by Yahoo Sports analyst and the first openly gay pro athlete Jason Collins. He took to Twitter to voice his concerns about discrimination during the Final Four.

Actor George Takei posted a statement on his Facebook page, which read in part, “If it goes into effect, Indiana will be marked as a state where certain people are not welcome, and so we will not visit. We will not spend. And we will not attend events, including Gen Con, the world’s largest gaming convention, held in Indianapolis each year.”

@GovPenceIN When you sign this "freedom" bill, will a list be published of the businesses that were asking for this law to be passed?

On Thursday, singer Miley Cyrus posted about the bill on her Instagram page. 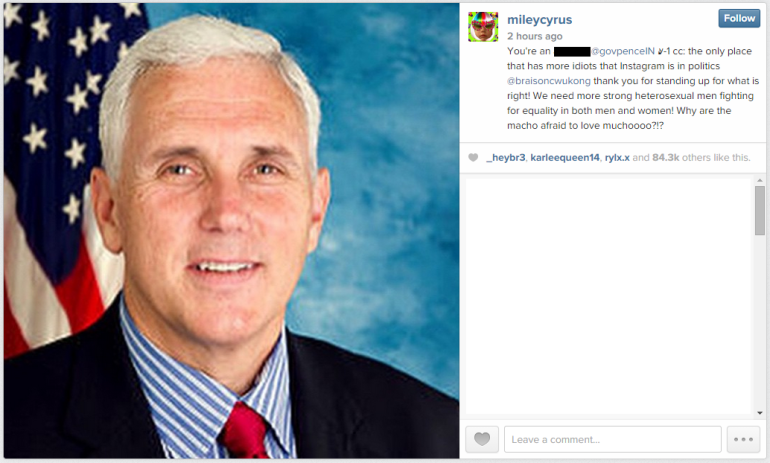 Apple is open for everyone. We are deeply disappointed in Indiana's new law and calling on Arkansas Gov. to veto the similar #HB1228.

White House Press Secretary Josh Earnest said on Friday, “…The signing of this bill doesn’t seem like it’s a step in the direction of equality and justice and liberty for all Americans.  And again, that’s not just the view of the administration, I know that’s the view of the Republican mayor of Indianapolis and a whole host of non-profit and private sector companies who have legitimate concerns about the impact of this legislation.”

For anyone who is refused service under #Indiana's new law, you deserve better. Acceptance and progress take time. But they always arrive.

“In the context of the current state and national conversation related to Indiana’s recent legislation, it is important to reaffirm that Ball State University has long been committed to a vibrant and diverse community and will not tolerate discrimination. The university expresses this in many ways, including our Equal Opportunity and Affirmative Action Policy, which clarifies that Ball State will provide equal opportunity to facilities without regard to race, religion, color, sex, sexual orientation, gender identity/gender expression, physical or mental disability, national origin, ancestry, or age.”

The Colts have always embraced inclusiveness, tolerance, and a diverse fan base. We welcome ALL fans to Colts Nation. ONE FAMILY!

“NASCAR is disappointed by the recent legislation passed in Indiana. We will not embrace nor participate in exclusion or intolerance. We are committed to diversity and inclusion within our sport and therefore will continue to welcome all competitors and fans at our events in the state of Indiana and anywhere else we race.”

“NIKE proudly stands for inclusion for all. We believe laws should treat people equally and prevent discrimination. NIKE has led efforts alongside other businesses to defeat discriminatory laws in Oregon and opposes the new law in Indiana which is bad for our employees, bad for our consumers, bad for business and bad for society as a whole. We hope Indiana will quickly resolve this.”

DELPHI, Ind. -- Libby German's grandfather said the Indiana State Police appeal to the public for information about the "anthony_shots" social media profile adds another piece to the puzzle.

On Monday, ISP released information into the investigation into the Delphi murders, appealing for tips about a person tied to the "anthony_shots" social media account. Mike Patty, Libby's grandfather, said he was hopeful when he heard that state police were releasing more information about the case.

INDIANAPOLIS -- Kroger cut the ribbon for its new Brownsburg store on Wednesday, marking the first new location since 2017.

The store is under a newer, modern look on both the inside and outside. The floorplan is 30,000 feet larger than the previous store it's replacing and will include a Starbucks. The store is a reflection of Kroger's $24.8 million investment into Brownsburg.

INDIANAPOLIS -- A Silver Alert has been declared for a teenage girl missing from Indianapolis.

Indiana State Police said 15-year-old Cabrini Stott was last seen on Monday at about 2 a.m. Her last known location was the 5800 block of Village Plaza S. Dr. on the city's east side, according to Indianapolis police.

Plumber getting $20K ... but not from Osteen

OMWBD working to give minority businesses opportunities in city development