INDIANAPOLIS, Ind. –Good Saturday afternoon! What a day! High temperatures reached the mid-60s and felt more like mid-April than January. The high temperature in Indianapolis was 66 degrees, just two degrees shy of tying the record 68 degrees from 1906. 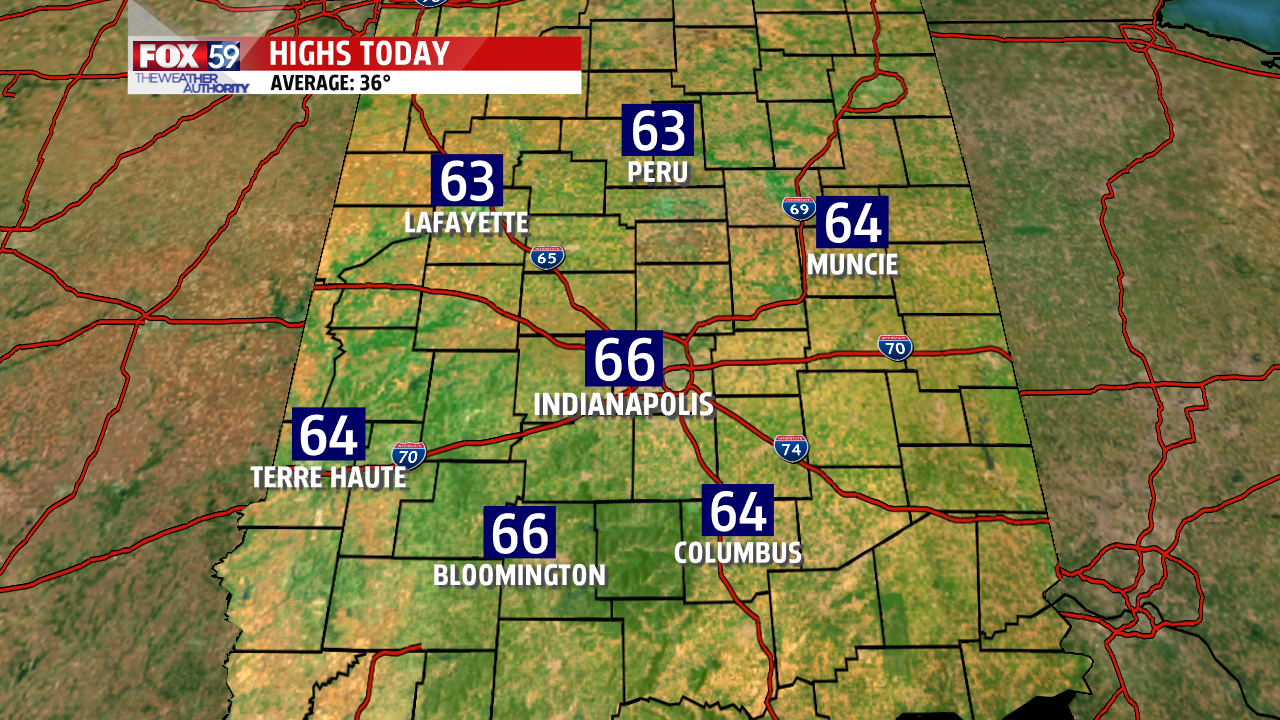 Tonight we’ll have clouds build in with a chance of a few showers and possibly a t-storm. Otherwise, expect a mostly cloudy sky with some areas of fog. The fog may be dense in spots across north-central Indiana where a Dense Fog Advisory is in effect from 1 a.m. to 10 a.m. Sunday. Temperatures will fall to the upper 40s with light southeast winds shifting east, northeast. 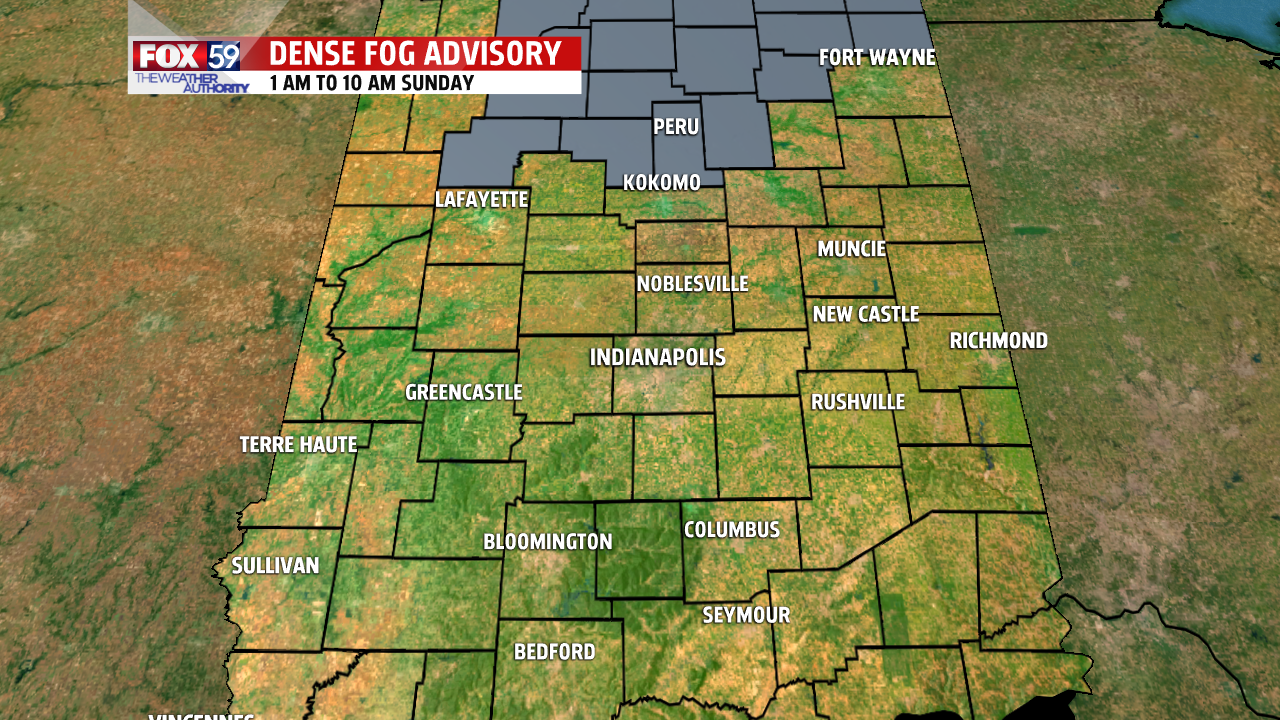 The map below shows the Storm Prediction Center’s outlook for a chance of t-storms in central Indiana tonight (shown in light green). The other colors represent where there could be severe weather. That threat is greatest in the areas in red (moderate risk). There, they could see large, damaging hail and tornadoes. 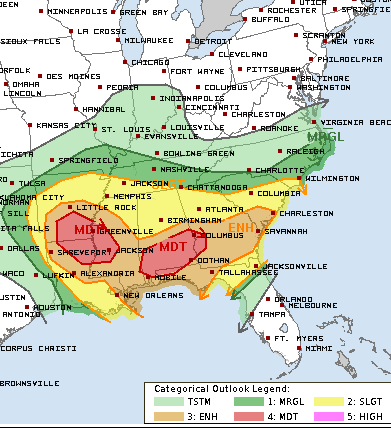 Scattered showers will be around on Sunday, especially in the afternoon and evening as a strong low-pressure system tracks to our south. Showers that move in will be coming from the east as the wrap around the central of the low. That same low pressure will bring more severe weather to the South Saturday night, a place that already got hit early Saturday morning. 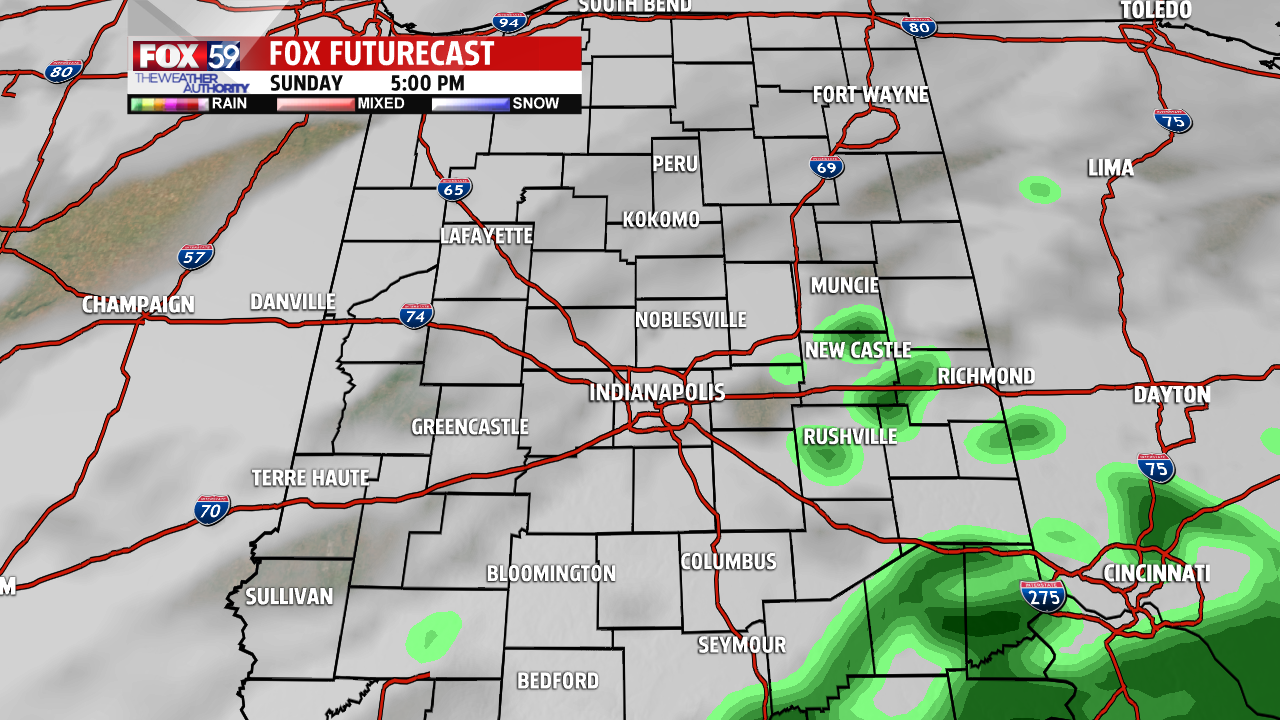 Showers will continue to be around central Indiana on Monday with strong north, northwest winds as the low departs.

Tuesday looks dry and mild with highs in the upper 40s. Changes will come Wednesday when a strong cold front moves in and drops highs from the low 50s early Wednesday down to near 30 degrees by Thursday morning. There’s also a chance of some rain Wednesday and snow Thursday. If you were hoping for a “winter” feel, you’re in luck. The long-range pattern favors colder weather. –Danielle Dozier 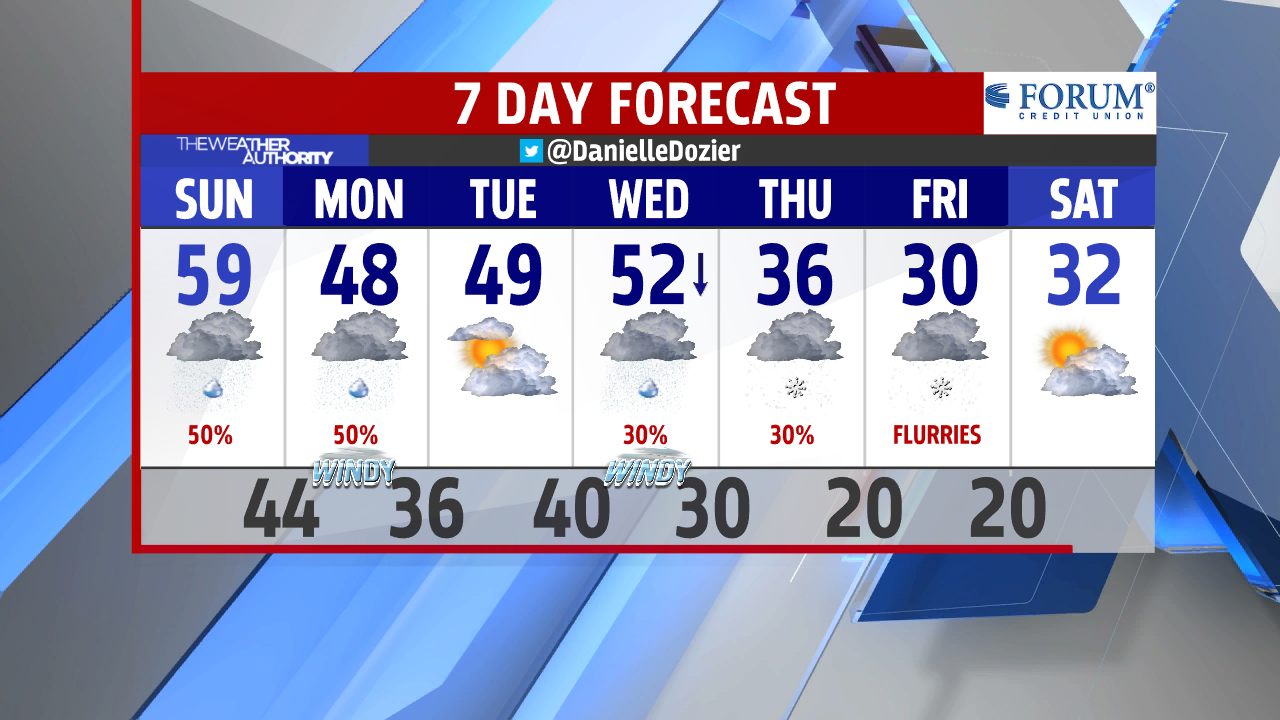 INDIANAPOLIS, Ind. -- A murder suspect allegedly killed his girlfriend while on pre-trial GPS monitoring for a December 2020 stabbing of a different victim, a gas station customer.

Marcus Garvin is now charged with murder in the death of 30-year-old Christie Holt in late July.

INDIANAPOLIS — Tuesday night thousands of towns and cities across the country celebrated National Night Out, a time for police and first responders to interact with the community they serve.

Officials in Indianapolis say the annual tradition is more important this year, especially in Indy - as homicides reach record highs.

The Centers for Disease Control and Prevention issued a new order temporarily halting evictions in certain areas of the country Tuesday.

The new moratorium lasts until October 3 and focuses on areas with heightened levels of community transmission of COVID-19. Not everyone is protected by the latest order, however. Here is what you need to know about the eviction moratorium:

Officer dead, suspect killed after burst of violence outside Pentagon

COVID-19 spreading fastest among children; here’s what parents should know

Truck flips from I-65, crashes onto residential street below; 2 teens ejected, child injured